A Christmas Story by Jean Shepherd 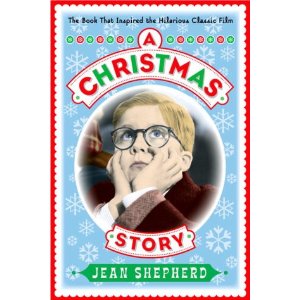 Which came first the movie or the book?  I pondered this question as I picked up A Christmas Story by Jean Shepherd the other day. I hate it when a book isn't any different than the movie. Why should I even bother reading it if they are the same? Fortunately that is not the case with this book which has just catapulted itself near the top of my Favorite Christmas books list.  Let me explain.

Apparently Jean Shepherd, a humorist and radio monologist, wrote several semi-autobiographical essays about his early years during the Depression.  He had these essays published in a book called In God We Trust, All Others Pay Cash in 1966.  Later he used four of these essays (and one from another volume) to co-write the screenplay for the 1983 A Christmas Story movie, which has become standard fare during the holiday season in America today. This book, published in 2003, contains the five essays that "Shep" drew material from for his screenplay. (From the Publisher's notes.)

The essays, like the movie, are funny.  Really funny. They are also read aloud good.  I found myself taking the book around with me wherever I went, reading passages aloud to whomever would listen.  I carried it to the lunchroom at school and regaled teachers with excerpts from this little gem of a book.

Shep's essays are not only funny they are superbly written. The essay Duel in the Snow, or Red Ryder Nails the Cleveland Kid was the only Christmas story. It contained the bits in the movie about Ralphie pining for the Red Ryder BB gun and the visit to Santa at the department store.  I was most familiar with the material in this essay.  The other four contained the stories about the Ovaltine decoder ring, the leg lamp, the school bully, and the Bumpus dog caper. All were a delight. Here is just a tiny, teaser excerpt from the essay Grover Dill and the Tasmanian Devil:


The male human animal, skulking through the impenetrable fetid jungle of Kidhood, learns early in the game just what sort of animal he is. The jungle he stalks is a howling, tangled wilderness, infested with crawling, flying, leaping, nameless dangers...He daily does battle with horrors and emotions that he will spend the rest of his life trying to forget or suppress. Or recapture. (81)

Now I need to run out and rent the DVD so I can watch the movie from the beginning-something I've never done before-and you need to get yourself to the bookstore or library and pick up this book.  Do it today.  You won't be disappointed.  I promise.

Posted by Anne@HeadFullofBooks at 5:55 PM