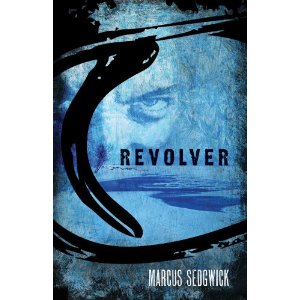 Argh! The selection of my favorite book for the Mock Printz Workshop was just made more difficult by the reading of this excellent book, Revolver by Marcus Sedgwick.


A boy sits in a cold, bare shack somewhere north of the Arctic Circle, alone but for his father's body lying on a table, frozen both by rigor mortis and the manner of his death. The boy's older sister and stepmother have gone for help. And then there is a knock on the door: outside is a giant of a man asking for the boy's father.


This is as stark a beginning as you can imagine. And it gets worse. The giant is convinced that the dead man has stolen his gold. He isn't going to leave without it – and he has a gun. But so in a way does Sig, the boy. -Mary Hoffman for The Guardian.co.uk

Revolver  is a very short book, just 200 pages. It can be read in one sitting, which is good because it is so taut and tense I never wanted to put it down.  Every word in this psychological thriller seems necessary and purposeful.  It's opening line sets the stage for the tension that follows: "Even the dead tell stories." Sig must discover what his dead father has to tell him in order to survive himself.

Several reviewers say that this is a coming-of-age story.  I don't disagree though I think of it more as a survival story and so much more. When asked by students what the book is about I tell them it is about a revolver, a gun, which plays as important role in the book as any other character. Obviously the title, Revolver, will attract male readers, which I'm always looking for, but I think it will have general appeal to all readers, including adults.Whether this book wins a Printz Award or not in January, I will be purchasing additional copies to place on my Nifty-Fifty Book Cart. I hope by doing this as many students as possible read this book.  You should, too!

Posted by Anne@HeadFullofBooks at 6:46 PM