Review and quotes: THE RESTAURANT AT THE END OF THE UNIVERSE 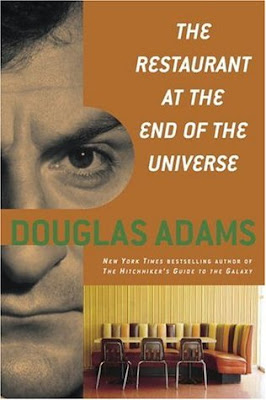 Title: The Restaurant At the End of the Universe by Douglas Adams


The story so far:  In the beginning the Universe was created. This has made a lot of people very angry and been widely regarded as a bad move.


'What a depressingly stupid machine,' said Marvin and trudged away.


The major problem—one of the major problems, for there are several—one of the many major problems with governing people is that of whom you get to do it; or rather of who manages to get people to let them do it to them. //To summarize: it is a well-known fact that those people who must want to rule people are, ipso facto, those least suited to do it. //To summarize the summary: anyone who is capable of getting themselves made President should on no account be allowed to do the job.


The Hitchhiker's Guide to the Galaxy offers this definition of the word "Infinite". Infinite: Bigger than the biggest thing ever and then some. Much bigger than that in fact, really amazingly immense, a totally stunning size, "wow, that's big", time. Infinity is just so big that by comparison, bigness itself looks really titchy. Gigantic multiplied by colossal multiplied by staggeringly huge is the sort of concept we're trying to get across here.


The little waiter's eyebrows wandered about his forehead in confusion.

Review (of sorts): I came to The Hitchhiker's Guide to the Galaxy party late in life. But when I finally did arrive, I enjoyed every minute of the experience. Adam's zany sense of humor, the jokes, the funny-sounding names, and a bit of a mystery attached to a particular number. I laugh when I think about the book.

Laughing is what I want to do these days due to the pandemic situation, so I opted to read the second book in the Hitchhiker's Guide series, The Restaurant At the End of the Universe. It is just as silly as the first book but maybe not as funny...or maybe the same funniness so it seemed predictable on that score. But I did laugh and it was worth the time for that reason and the quotes. Oh, the quotes. You know the book is going to be funny right from the start with the questioning if the universe should have been created in the first place. The quote from page 56 is from Marvin, the depressed robot. We met him in the first book and he is always good for several laughs.The other quotes I picked all make me smile or even laugh out loud. My favorite is the quote about anyone who thinks they should be President, shouldn't be. That seems really obvious right now with Trump as ours...totally unqualified but he thinks he is the best. Ugh.

Just in case you are wondering, there is a tiny plot in The Restaurant At the End of the World. Zaphod Beeblebrox has been tasked with locating the person who is really in charge of the universe, since he, the President of the Universe, knows it isn't him. Douglas Adams seemed to have an endless imagination for creative names and places, all of them funny.

I listened to the audiobook read by Martin Freeman. His name alone makes me laugh since the robot is named Martin and he wishes to be free, but I digress. The first book in the series was narrated by Stephen Fry, one of the best at his craft. Though Freeman did a fine job, I missed Fry's narration. It is a perfect book to digest in the audio format, allowing for the narrator to help with comedic timing of the jokes and, if one loses their place as sometimes happened when listening to the audio narration, no bid deal. You won't miss any of the plot, since the plot is almost missing anyway.

The third book in the series, Life, The Universe, and Everything, has been added to my TBR pile. Who knows I may get to it sooner than later.