Review and quotes: HUM IF YOU DON'T KNOW THE WORDS 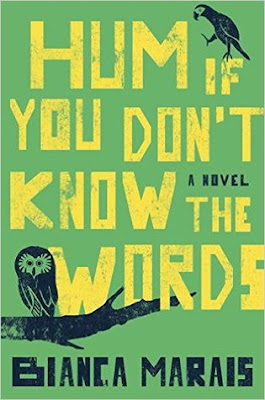 Title: Hum If You Don't Know the Words by Bianca Marais


ROBIN CONRAD, 13 June 1976, Boksburg, Johannesburg, South Africa---I joined up the last two lines of the hopscotch grid and wrote a big "10" in the top square. It gave me a thrill writing the age I'd be on my next birthday because everyone knew once you hit double digits, you weren't a child anymore.


BEAUTY, 16 June 1977, Yeoville, Johannesburg, South Africa---Only after I had learned those boundaries and generalities of my grief was I able to venture further into the mountains and valleys, the peaks and troughs of my despair. And as I traversed them-breathing a sigh of relief thinking that I'd conquered the worst of it-only then would I finally arrive at the truth about loss, the part no one ever warns you about: that grief is a city all of its own, built high on a hill and surrounded by stone walls. It is a fortress that you will inhabit for the rest of your life, walking its dead-end roads forever. The trick is to stop trying to escape and, instead, to make yourself at home. (from page 320+)

Summary: Robin is a young, white girl living in South Africa with her parents while apartheid was in full effect in the 1970s. When her parents are both killed and their black maid abandons her, Robin is forced to go live with an aunt who is unprepared to raise a young girl. To allow this arrangement to work another black woman, Beauty, is hired to stay with Robin when the aunt is away. Both Robin and Beauty have experienced grief upon grief. As they forge a new relationship together they find solace in the other, even love. But love doesn't mean we don't hurt or disappoint the other person, sometimes in an effort to cling to a person out of personal and perceived needs.

Review: I read a review by Sue over at her blog Book by Book of Hum If You Don't Know the Words and was intrigued enough to add the book to my TBR. I am always on the hunt for books set in other countries, especially those I know little about. Reading a book set in South Africa about the effects of apartheid on children and blacks seemed to really fit the bill so I delighted when the library audiobook came available and it was my turn to listen to it. Unfortunately, however, the timing was poor as the coronavirus shutdown has done a number on my moods and reading books on serious topics has been difficult. In fact, I listened so slowly, the book returned itself to the library before I was done and I had to request it again mid-book with a three or four week wait period in between. At any rate I resolved to finish the book and found the ending especially poignant and important. I am so glad I stuck with it.

Robin always thinks of herself as older and more mature than she is. For this reason she often gets herself into pickles of some sort or another, many of which require adults to help her get out of the messes she makes. Beauty comes into her life just when she needs her most, though she doesn't understand this at first. Beauty is an educated black teacher who is searching for her daughter who has gone missing after a disastrous children's march which goes wrong. Because Beauty does not have the proper papers to allow her to be in Johannesburg, she has to lay pretty low as she makes her inquiries and searches for her daughter. But she is determined to find her as she has already lost a husband and a son to apartheid. She will not lose a daughter, too. Because of her own personal losses Beauty understands Robin's grief and hopes to help her cope with griefs magnitude. That is why I included a quote from much further in the book than page 56, I thought it was such a beautiful description of grief as a city all of its own, and a fortress you have to live in all your life. This sounds awful but the trick is not trying to escape but making yourself at home in the grief, making it part of you.

Apartheid was such an ugly chapter in the lives of South Africans, I am glad that I am on the other side of that chapter in South African history. When Nelson Mandela was freed and the country stopped their egregious ways, one can hope for mankind, but in 1976/77 that wasn't the case. Young white children were taught to hate and blacks lived in fear of all whites, even those who attempted to help them. Hum If You Don't Know the Words beautifully tells one such story.

-Anne
Posted by Anne@HeadFullofBooks at 12:12 PM