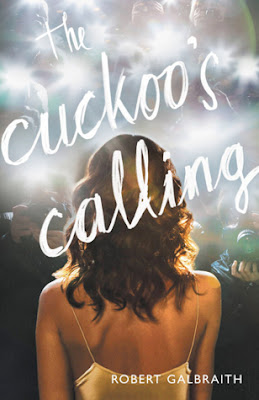 
Though Robin Ellacott's twenty-five years of life had seen their moments of drama and incident, she had never before woken up in the certain knowledge that she would remember the coming day for as long as she lived.

Friday56 quote (from chapter 3, the farthest point in the preview):


His subconscious had become entangled with Charlotte again; it was a surprise to see the strange girl enter the room. She had taken off her coat to reveal a snugly, even seductively fitting cream sweater. Strike addressed her hairline.

Summary: Cormoran Strike is a private detective. Before his recent profession he was an MP in the military but had his leg blown off while serving in Afghanistan. The day we meet him he has just broken things off when his long time girl friend, Charlotte, and is down on his luck, even having to sleep in his office. Robin Ellacott is serving as his temporary secretary, which he can't really afford, but she is the most efficient person the agency has ever sent over. On the day she arrives so does a new job, one that should pay nicely, one Cormoran Strike is well suited to investigate.

Review: After J.K. Rowling finished her Harry Potter series she published an adult book in 2012, Casual Vacancy, which I purchased for my high school library. I thought my students were Rowling fans and would want to read her current stuff. I was wrong. American teenagers did not want to read her non-Harry Potter stuff and the book languished on the shelves unread. The following year when I learned that Rowling had published another adult book, this one under the pseudonym of Robert Galbraith, I decided against purchasing it for the library not wanting another of her books to sit around unread. Now that I've read Cuckoo's Calling I realize I just got my purchases backwards. I think my teen readers would have liked this book, a mystery and would have been interested in its sequels, too. Oh well. Can't go back in time, it is too late to rectify that flub.

I like reading mysteries so it is odd how few I actually read each year. The good thing about being a mystery fan without reading many of them, I am rarely disappointed in the plots. I didn't even figure out who committed the murder, like a lot of people say they did. I liked the writing, I even noticed a few of Rowling's brilliant turn-of-phrases that she is so famous for. I want to read on in the series and each successive book has better and better ratings. That is something to look forward to. Right now with the pandemic still raging, we are pretty much stuck at home. Serious books are not my reading choice these day, nor are docu-dramas on TV. Instead give me mysteries, action/adventure, or comedies. This book fit my needs nicely and I can recommend it to those of you who, like me, delayed reading it when it first came out.

-Anne
Posted by Anne@HeadFullofBooks at 7:39 PM