We've been home for over a week from our wonderful European vacation. We are over jet lag, at last, and both of us are recovering from colds we got when we returned home (airplane germs?). Today I am highlighting the end of our trip where we stayed with our brother and sister-in-law in Switzerland. We made daily sojourns to see the sights but came back to their apartment every evening for fun Swiss food like fondue and delicious raclette.


For updates and highlights from earlier parts of the trip, please click the hyperlinks:
London, part 1
Prague, part 2
Bavaria, part 3A
Bavaria, part 3B

We left Munich and headed toward Zurich on a train. Though we had reserved seats someone was sitting in them so we sat across from the couple instead and struck up a conversation. They were fellow travelers from Australia (Darwin) and both were recovering from horrible headaches due to their Oktoberfest drinking the night before. Meeting new people is one of the best parts of traveling. In London we made new friends at our B&B every morning as we sat and ate with other guests. In Prague we visited with other Americans staying at our hotel. In Nuremberg we chatted with Germans sitting nearby as we dined in a restaurant; one was a history buff who had lots to share. Our new Australian friends got off the train before it entered Switzerland so the four of us were able to sit together and make plans for the end of our trip.

Tony (Kathy's and my brother) has lived in Switzerland for just the past 6 months. He and his wife expect to live there for only two years so family members are flocking to visit them while they are there. Right before we got there, they were visited by a niece and her husband, a day after we left they expected three friends, and later in the week Becky's sister was expected. Whew. I guess everyone waited for September/October for a visit

Tony and Becky live in a little village about 20 minutes by train from Zurich and their apartment has a view of Lake Zurich. We didn't get to see this view of the lake with the Alps in the background while we were there, however, as it was cloudy and rainy most days.
The day after we arrived in Switzerland Tony escorted us on a big adventure. We took a train to Lucerne. We walked around this beautiful and picturesque town before boarding a boat for the second leg of the adventure.

The boat docked at Vitznau and we clamored aboard the Rigi Kulm cogwheel railway, the oldest mountain railroad in Europe. We ascended several thousand feet gaping at the scenery and at the small mountain farms as we passed. We had a steep climb by foot after we disembarked but the views of the countryside, the lake, and the mountains made it worth the effort. 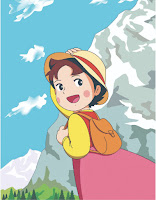 The next day Don, Kathy, and I headed to Zurich on the train alone. We decided to go to the Swiss National Museum because it was raining and sightseeing did not appeal to us. We are glad we did. The museum had a very well curated exhibition on the history of Switzerland. We learned so much and enjoyed many interactive aspects of it. We now know why Switzerland is and has been a neutral country and we suspect that is why so many prominent thinkers during the Age of Reason came from Switzerland. We also enjoyed the temporary exhibition about the Japanese artists who came to Switzerland in the 1970s to get inspirations for their anime series on Heidi. I really enjoy seeing artists preliminary diagrams to see how they create their work.

After leaving the museum, we joined up with Tom, who had taken a train to Buhler, a small village that bears his last name. Even though it was still raining we headed out to see a few sights recommended by Rick Steves in his guide.

The next day Tony was our guide again. This time we took a train the other direction to a small town, Einsiedeln, which has a huge monastery which houses a black Madonna. Photos were not encouraged so I grabbed a photo from the Internet. Apparently she is clothed in different finery depending on the time of the year. When we saw her she was wearing the golden cloth as pictured.
After visiting the stables and walking the grounds of the monastery, we stopped in a coffee shop to warm up (it was still raining.) I was on the hunt for the perfect piece of cake so I ordered one I thought look delicious not knowing it was about 90% proof alcohol. Yuck! Tony and Don ended up eating it. Our last night in Switzerland and the end of the adventure, Becky invited a Swiss neighbor to join us for delicious raclette. See the photo below. Raclette is a way of grilling vegetables and meats at the table while, on the lower tier cheese is melting to add to the foods after they are cooked. I am a big fan! Delicious and fun food! 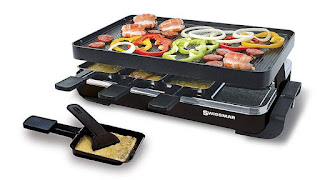 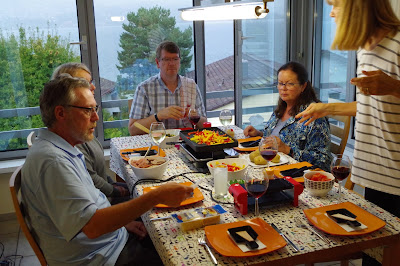 All good things come to an end. We got up at 4 AM the next morning in order to board the first train out of Oberrieden going to the Zurich airport. By the time we got home at 4 PM with the time change we had been awake for nearly 24 hours. But look who greeted us when we got home. It is always good to come home.
Our trip is done. As I reflect upon the trip I laugh at how much dumb stuff I took with me. I was really concerned that I would get sick and not have what I needed, so I took Sudafed, Benadryl, Gas-x, anti-acids, Tylenol, in addition to my prescriptions, only using the Tylenol. I also took every foot thing I could figure out to take because I knew my feet were going to be a problem. They were and the stuff didn't help. I took sandals and shorts thinking it might be hot. It wasn't. I took dress clothes thinking I might want to dress up. I did. But I could have worn more casual clothes just as easily. Two rain coats took up room in the suitcase when one would have sufficed. We took 16 protein bars in case of emergency and only ate about eight of them. I carried a magnifying mirror, and only used it once. Same for the umbrella. I even took too many socks. Next time I will pack lighter!

It was lovely to end the trip with family and I am so grateful to my brother and sister-in-law to make room for us and to make our visit so comfortable. It was fun sharing the adventure with my sister and brother-in-law. We now have shared memories that will be fodder for stories in the future. I'm already trying to figure out how I can work in a trip with my younger sister in the future. Where shall we go? Maybe a sisters only trip? We'll see.

Thanks for reading this series of blog posts!

Posted by Anne@HeadFullofBooks at 2:54 PM