Weather: Overcast. We are hoping that the rain holds off so we can take the boy to the pumpkin patch when he wakes from his nap.

Austen's Pride: A Musical: Last night Rita and I joined a friend and her mother for dinner and a show. We ate at an Italian restaurant and I had the hugest bowl of fresh clams and linguine, Rita had chicken and risotto. Everything was delicious but we couldn't linger because we had to rush down the street to make it to the theater on time to be seated for the musical Austen's Pride. The premise of the play was Jane Austen needed to dust off First Impressions, rewrite it, and make it into the book we know today, Pride and Prejudice. She gets help from her sister Cassandra and the whole cast of characters from the book. It was so much fun to see how an author interacts with her text and makes decisions about wording or action. At several points in the play characters would come to Austen and ask what happens next or what they should do. The music part of the musical was forgettable but the singers all had tremendous voices, including the actress who played Austen who was clearly pregnant. We all left the theater remarking on her strong voice and remembering how out of breath we were during pregnancy. How did she do? All in all the evening was a huge success...then we had to drive home and got trapped in the hugest traffic jam ever, which was weird for a late Saturday night. It took us over an hour longer to get home than usual.

Jet lag recovery: It took us at least five days to fully recover from our jet lag after returning home from our European vacation last Sunday. The good part was both of us went to bed earlier every night so our Fit Bit Sleep scores were in the high 80s, low 90s, usually they are in the 70s or 60s.

European vacation highlights, part 3B,  Bavaria: After our delightful sojourn in Rothenburg we raced down the autobahn (I'm not kidding about the racing part) to meet up with our brother and sister-in-law, Tony and Becky, in Fussen, the town at the base of the famous Neuschwanstein castle. The next day all six of us hiked up the hill to tour Mad King Ludwig's castle.
After lunch at an outdoor restaurant with a view of the caste, my brother and sister-in-law turned around and headed back to Switzerland. Our quick visit would be extended after we joined them at their home in a few days. En route to Munich, our next point of interest, we stopped by the Wieskirche, a pilgrimage church which houses a weeping Jesus statue. We saw many people with infirmities making their way to the church in hopes of a miraculous healing. Unfortunately, a tour bus of tourists pulled up while we were there and their objective didn't seem one of reverence, but just wanting to take photos of themselves with the statue. Sigh.
A record: Don and I wore our Fitbits throughout our vacation. On our hike up to Neuschwanstein Castle, during the tour itself, and then the hike up to Marienbruke, we each recorded over 80 flights (elevation or stairs) a record. No wonder I was tired! I usually have to work to get 10.

Munich and Dachau, our last stops in Bavaria: Because of Oktoberfest we were unable to find lodging in Munich so we stayed in Augsburg, not far away.

At the recommendation of several people we decided that we should visit Dachau, the first and model Nazi concentration camp. Like our time at the Nazi Documentation Center in Nuremberg, visiting Dachau was a very emotional and draining experience. To think of the atrocities committed against thousands/millions of human beings. It is so tragic. Yet the museum is also a testament to human endurance and strength. Despite the terrible conditions, some people survived and built the religious memorials now gracing the back of the camp.

Munich: What a fun, beautiful, zany town! We saw a glockenspiel clock, an oompah band, wonderful architecture, people running around in lederhosen and dirndls, a skeleton covered in gems in a cathedral, a huge park where we found actual surfers in the river.


Tomorrow I hope to finish up my highlights of our European vacation with photos from Switzerland. Please come back.

And, yes we made it to the pumpkin patch: And a party was happening at the farm. Ian had fun riding a tractor train, dancing to the bluegrass band, riding in the wheelbarrow, and eating kettle corn...and the photos with pumpkins are pretty cute, too. 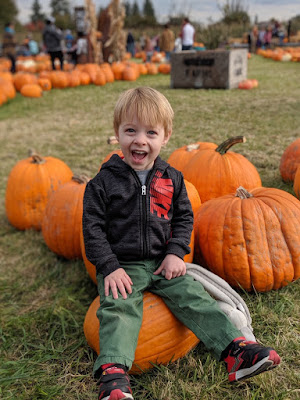 Have a good week. Thanks for visiting my blog.

Posted by Anne@HeadFullofBooks at 7:59 PM