Audiobook review: The Girl Who Drank the Moon by Barnhill 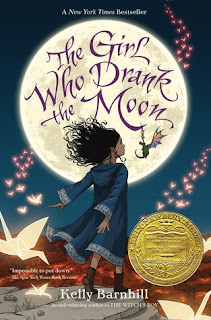 1. In Which Anne Attempts to Summarize the Book
Once a year the people of the Protectorate are forced to sacrifice the youngest baby born in the year to the evil witch so that she won't destroy them. Everyone is extremely sad about this forced sacrifice but they worry about the consequences if they don't comply. Instead of killing the babies, a kindly witch, Xan, actually rescues them, feeds them with starlight, and delivers them to kindly families who raise them with love. Once Xan accidentally feeds the rescued baby moonlight instead of starlight, which is full of magic so she decides to raise the child herself. This child is a delightful yet a wild child who needs a firm hand to train her up to use her magical skills properly. If Xan isn't an evil witch does one actually exist? Are the people of the Protectorate victims in more ways than one? There are lots of plot twists and plenty of unique characters to help the reader find out the truth.


2. In Which the Main Characters Are Named
Xan, a kindly witch who has lived for over 500 years and has forgotten many things which might be important now yet she always tries to do a good job.
Glerk, a swamp monster who lives in the bog. He is older than magic.
Fyrian, a tiny dragon who was raised by Xan and loved by Glerk. He has always believed he was a simply enormous dragon.
Luna, the baby rescued from the sacrifice who was given moonlight to drink, which is powerfully magical.
Sister Ignatia, the leader of the Sister of the Stars, advisor to the leaders of the Protectorate
Antain, a carpenter, nephew of the Grand Elder of the Protectorate, he is a loving, kind person.
The madwoman, is locked in the tower after she went mad with grief after she was forced to sacrifice her daughter.


3. In Which the Newbery Medal Award Committee is Quoted

“Moonlight is magic. Ask anyone you like.” Barnhill’s story is also pure magic, distinguished by careful development of a complex plot and indelible evocation of unique characters. Love, heartbreak, hope, sorrow, and wonder all shine in exquisite, lyrical prose.

“This compassionate, hopeful novel invites children everywhere to harness their power, and ask important questions about what keeps us apart and what brings us together” said Newbery Medal Committee Chair Thom Barthelmess.

4. In Which Anne Tries to Convey How Much She Loves the Book
Moonlight may be magical and so is this book. From the very first page I was completely sucked in to this magical story and its cast of unique characters. I did feel the power that hope has over despair, how love can concur sorrow and selfishness, as I listened to this audiobook. I was swept up in the story and charmed by the writing. I don't often read books targeted at middle grade children, but I am SO glad that I did read this one. In fact, it is sort of a relief to read a story where I never had to cringe at foul language or worry about gratuitous violence or inappropriate situations.


5. In Which Praises for the Author, Kelly Barnhill, and the Narrator of the Audiobook, Christina Moore, are Given.
Part of the magic of any good book is the writing. Kelly Barnhill's previous works had received some critical acclaim. I'd even heard of The Witches Boy and I rarely pay attention to middle grade books. But her work in The Girl Who Drank the Moon was so deft. I kept marveling at how she made the book "not too" anything---not too scary; not too sad; not too mushy; not too complicated. I kept wondering how Barnhill would handle this situation or that without overwhelming her reading audience, but the story-line was handled just right.
Christina Moore was perfect as the narrator of the audiobook. I especially liked her voice for Fyrian, the miniature dragon. She made him sound so friendly and sweet and small, even when he got huge. Reading for a fantasy novel must be no easy task with the variety of voices and creatures but Moore did a remarkable job. In fact, I would recommend this medium for your reading/listening enjoyment.


6. In Which Anne Encourages You to Read and/or Listen to the Book, too!
I guess this heading is really unnecessary since it must be obvious that I think very highly of this book. I especially want to encourage parents of elementary children to consider this book for a family read-aloud selection. My guess is that children as young as six or seven and as old as twelve or thirteen would really enjoy the community spirit of this book read together. Heck, borrow the audiobook from your library, download it onto your phone or device, and listen to it as a family as you take your family vacation this year. That way even your high school kids will enjoy the book with the family!

Posted by Anne@HeadFullofBooks at 8:36 AM