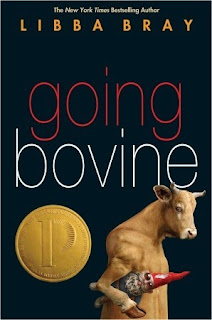 Last week during our cross-country road trip, my daughter and I listened to a favorite YA audiobook, Going Bovine by Libba Bray. We had both listened to it back in 2009 and had positive memories of the book and the listening experience. So we added it to our road trip playlist and I am so glad we did.

In my original review, written in January 2010, I said,


Going Bovine by Libba Bray- Cameron Smith is a nobody high-schooler with a dysfunctional family until his diagnosis of Creutzfeldt-Jacob, "mad cow" disease changes everything. When his hallucinations begin they seem to be related to his disease, or are they? So begins the journey, or is it an hallucination (?), to find the elusive Doctor X who will not only cure Cameron of his disease but will also save the world from the negative effects of dark matter. Along the way Cameron is helped by a dwarf side-kick named Gonzo, a punk-rock angel named Dulcie, and a Norse God stuck in the body of yard gnome. The quest has many parallels to the hopeless but inspirational efforts of Don Quixote, the book Cameron had been reading before his illness. The story is tragic, inspirational, funny and sad. I laughed and cried. The ending wasn't what I wanted but it was very satisfying.

Soon after writing the review, Going Bovine won the coveted 2010 Printz Award. A student who was reading as a Mock Printz participant that year, told me the book would win and she was right! In fact, a few months later that same girl told me that she was rereading the book for the third time because she loved it so much and felt that it was so deep that reading it once wasn't enough to catch all the hidden gems within.

Over the years I have frequently mentioned Going Bovine in my blog. I, too, came to realize what a special book it was. In 2009 I selected Going Bovine as one of my favorite reads of the year. In 2011, I mentioned Going Bovine on a Top Ten Tuesday post for Thanksgiving, calling it a "YA book that is a cut above the rest." On another TTT post in 2016, the task was to pair contemporary novels with classics. Of course I paired Going Bovine with Don Quixote, even though I haven't read the latter. In 2013 the TTT topic was to identify books with great endings. Here is what I said about Going Bovine when I added it to the list, "... the story is either a madcap road trip novel or a tragic disease tale.  Either way, the ending brings all the parts together and the reader is left with both a question mark and a smile."

I have listed Going Bovine at least fifteen times during Top Ten Tuesday posts. In 2012 I listed books which I often recommend that others read. Of course I listed this book, but here is the comment I made: ".I actually haven't recommended this book to many adults but I think that English teachers should read it since it is so many literary allusions in it and it crammed full of symbolism.  If I was a College professor, I'd make my students read it just so that I could talk about it over and over again.  Besides the fact, the book is flat out genius." Ha-ha. Isn't that great?  "If I were a college professor..."

Well, it is obvious that I like this book. But how was the re-read? Here is what I said right after we got home from the trip, " If it is possible I liked this book better the second time around. Narrator Erik Davies was spot on. Can I give it 6 out of 5 stars?"

Carly and I were both in tears as the audiobook wrapped up. In fact, we were both so moved, we didn't talk about the book for one full day after completing it. When we finally did talk about it, we both ended up in tears again. Cameron, the hero of the story, confronts his own death, yet along the way he learns so much and lives so fully. If only we all had a chance to embrace life so fully and meet our challenges head-on.

Going Bovine has to be the quintessential tragic-comedy. If you missed it in 2009, it is not too late to read it in 2018. I promise you that you will laugh and cry, you will groan and cheer, you will have strong feelings. One of those feeling will be satisfaction that you have finally read this marvelous book. What are you waiting for?

Posted by Anne@HeadFullofBooks at 6:30 PM