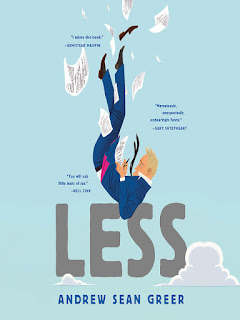 Next week's book club selection is LESS by Andrew Sean Greer. The club, which is made up of teachers and retired teachers, is getting a reputation for selecting pretty serious books. Books which deal with important topics like immigration and abandonment (The Leavers), family communication and cultural issues (Pachinko), slavery and death (Lincoln in the Bardo), and issues related to motherhood and the meaning of family love (Little Fires Everywhere.) Though all these books have been excellent and the topics generated great discussions, we craved a laugh or at least a more lighthearted selection.  LESS came to our attention when it won the 2018 Pulitzer Prize for Literature. It sounded like a perfect selection for a club in need of a bit of fun.

Things aren't going well for Arthur Less. He is turning 50 and feels like he is the only homosexual who has ever gotten old.  His writing career, which was never the most illustrious thing, has gone down hill so that now if he sits next to someone on a plane, they won't know of him or his books. A friend once told him that all he did was write the gay Ulysses story. In addition his x-boyfriend is getting married and has invited him to the wedding. He doesn't want to go but has to figure out a solid reason to not attend the ceremony.

Arthur feels alone and depressed. In a moment of almost sheer madness, he accepts invitations for a series of literary events, award ceremonies, and teaching positions which will take him around the world---to Italy, Germany, France, Tunisia, India, and finally Japan. He most certainly will be forgiven for missing the wedding if he is out of the country when it takes place. So off Less goes on a Ulysses-type journey of his own but as he moves from one location to another he is met with disaster after disaster. To the reader (me) everything seemed hilarious and brilliant at the same time.

In a literary festival in Italy, Less finds himself in the running for a literary award he has never heard of before. He thinks, “How has it come to this? What god has enough free time to arrange this very special humiliation, to fly a minor novelist across the world so that he can feel, in some seventh sense, the minusculitude of his own worth? Decided by high school students, in fact.” But out of this disaster emerges a kind of humanity. As it turns out the teenagers like Arthur and he likes them.

Less is always putting himself down, or dare I say, he is always trying to diminish or make less of himself. Yet circumstances lead the reader to the opposite conclusion. Everywhere Less goes people like him and he does great at teaching, or making friends, and he even finally decides that a rewrite of his latest novel is in order, this time with a humorous slant. By the time that Less wanders home to San Francisco, the reader is definitely cheering for him and for his future.

As I was preparing for this review, I stumbled upon the review in the New York Times by Christopher Buckley. Even though people were sleeping in the room I was in as I read it, I couldn't stop myself from laughing out loud. The book is funny and so is this review. Read both!

6/27/18 P.S. I just got back from book club and was shocked that I was the only person in the group that enjoyed this book. As we diagnosed the reasons, the topic of audiobooks came up. I was the only one who listened to the book. Perhaps the book is funnier and more poignant in that medium. At any rate I stuck to my guns and remained resolute in my opinion of LESS. I loved it.

Posted by Anne@HeadFullofBooks at 5:37 PM