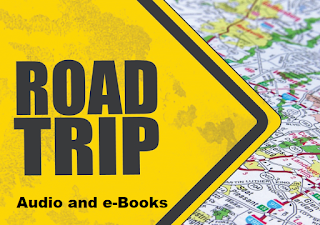 Yesterday my daughter and I concluded our cross country road trip: New York to Washington State. According to Google maps the trip was 2,875 miles and could be driven in 43 hours. Of course, our trip had side trips and wasn't accomplished in a nonstop fashion. Our trip took six days of pretty intense driving and we got home yesterday around 7 pm.

While on the road we listened to audiobooks. In the evenings and on the plane ride to New York, I read e-books. Here is our road trip in books:

We each had several other books on our devices which we didn't get to, or decided we didn't want to listen to. One book club selection, The Leavers, is 15 hours of listening time and we decided that we didn't want to get stuck in a super long story. Two others, The Hag-Seed and Euphoria, didn't strike our fancy after brief previews. While two others, The Nightingale and Goldfinch, Carly wanted to listen to but since I had previously listened to them, we decided against them.

Posted by Anne@HeadFullofBooks at 3:20 PM