The Uninterrupted View of the Sky by Melanie Crowder 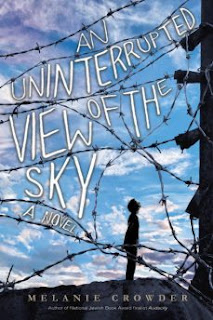 Francisco is a seventeen-year-old, half-hearted student living with his parents in Bolivia in 1999. His real interests lie in playing football (futbol) and making plans to open a shop to sell futbol jerseys, once he and his friend, Reynoldo, graduate from school. His father, a taxi-driving poet, wants Francisco to use his brains and go on to university after graduation. His mother mother is light-skinned, from the ruling class. Francisco looks like his father, dark-skinned from the Aymara tribe, so he doesn't ever feel like he fits anywhere.

When Francisco's father is arrested for a seemingly innocent action of carrying a can of gasoline to feed into his taxi, everything in the family is thrown into tumult. At that time in Bolivia, the poorest country in South America, politicians tried to appease the United States and our war on drugs by arresting anyone suspected of anything related to drugs using a law called 1008. People in the lower classes. who could not afford a lawyer, would languish in over-crowded prisons without so much as a court case or any hope of ever getting out. If the family had no other form of support, they would be forced to move into the prison, as well. Francisco and his younger sister are forced to do just that when their mother, sensing the hopelessness on the situation, abandoned them. The title, The Uninterrupted View of the Sky, suggests that wrongful imprisonment keeps the family from enjoying the simplest of freedoms---a view of the sky.

Suddenly everything in Francisco's life changes. His old friends abandon him. He alone must care for his sister and find a way to help his father. Suddenly education and the knowledge it brings becomes very important. If Francisco is ever going to help his family he must go to university and study law. In the meantime, he must also get his sister to his father's family upcountry, even though he thinks their life there will be so unsophisticated and backwards. Poetry becomes a tool for expressing feelings and communicating across cultural and generational divides.

I became aware of Melanie Crowder after reading her astonishingly good book, Audacity, about the Triangle Shirt Waist fire and the rights of workers in the clothing industry in this country in the early part of the twentieth century. That book was written in verse. The Uninterrupted View of the Sky, though not written in verse, does include a lot of poetry which is really well done and advances the story and the understanding. Obviously Ms. Crowder has a gift with poetry. She also said, in the Afterward, that she wrote this book in response to a personal situation. In the 1990s she spent some time in Bolivia and she saw first-hand the corrupt justice system and the forced imprisonment of people too poor to pay for legal help, all done to satisfy the US war on drugs and Law 1008. Since the 1990s a few things have improved for the indigenous peoples, she reported. Now they are allowed to be part of the government and to make laws that don't unfairly target indigenous populations but in the 1990s, this was not the case. This book was a direct result of the inequalities she saw herself in this small South American country.

This YA book has heart, and I assure you it will touch your heart. Often it seems that YA novels deal with such small, first-world problems. That is not the case with The Uninterrupted View of the Sky.
This book opens the eyes of the reader to much bigger and life-threatening problems that exist elsewhere in the world. It does it gently and thoughtfully, with a touch of poetry, so the reader doesn't end up feeling clubbed over the head with the information. I highly recommend it for both teen and adult readers.