Loving vs. Virginia: a Documentary Novel of the Landmark Civil Rights Case 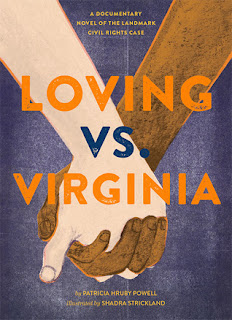 Loving vs. Virginia: a Documentary Novel of the Landmark Civil Rights Case by Patricia Hruby Powell is going to be a hard book to review accurately.

Aptly named Loving v. The Commonwealth of Virginia (1967) was a landmark Supreme Court case which invalidated laws prohibiting interracial marriage. In 1958 Richard Loving married Mildred Jeter in Washington, DC. Within days of returning to their home in Virginia they were arrested and charged with unlawful cohabitation. They were found guilty and were told to move out of the state and not return for twenty five years. When they returned to Virginia five years later for a visit they were re-arrested. Inspired by the civil rights movement, Mildred Loving wrote to then Attorney General, Robert Kennedy asking for his help. All the Lovings wanted was to be able to move home to live near their family in Virginia. After lower courts refused to reverse the decision, the Lovings' case, with the help of the ACLU, was heard by the Supreme Court of the United States. Mildred and Richard Loving did not attend the day that the case was being agued before the Supreme Court, but in a statement to the justices, Richard said, “Tell the Court I love my wife and it is just not fair that I cannot live with her in Virginia.” By a unanimous decision, the court agreed with the Lovings and struck down the lower court decisions ruling that state bans on interracial marriages were unconstitutional.

In Loving vs. Virginia, author Patricia Powell and illustrator Shadra Strickland take the Lovings' story and make it into a novel, written in poetic style and based on the facts from the court case and interviews done by the author with family members and friends who are still living. In addition, the illustrations done by Strickland add to the content and look a little like illustrations one might have found in magazines or books in the 1950s with a small color palette. Interspersed throughout the book are actual photographs from the civil rights movement and brief overviews of current laws and decisions.

The whole book was informative and very well done. I knew next to nothing about the Lovings and their famous court decision prior to reading this book. By making the book a novel, Powell was able to give details and conversations that may or may not have happened, to take poetic licence, literally!
By writing their story in poetry rather than prose the details are given beauty and majesty. The poems are very accessible, too, which allows the reader to speed through the book, which reads very fast. I found myself only lingering on the photos and the overviews of laws and court decisions. I tend to think that the poems in books written in the poetic style should be spectacular/special otherwise I'd prefer the usual prose style. I don't think these poems are spectacular except they lend some dignity to the whole story, so I didn't mind them.

But now I stop to quibble, not with the author but with the publisher. The book is being marketed as a YA book, though it certainly is excellent for both younger and older readers. That said, the book is not the standard size of a YA novel. It is larger, 26 cm x 19 cm, verses the more normal size of 21 cm x 14 cm. You might think that is no big deal and it probably isn't a big deal to adult readers, or even younger kids, but to teens the size matters.  When a teen reader sizes up a book they DO NOT want to pick up a book which looks like it might be a children't book. I know it seems trite, but if the size of a book is too large, teens won't read it because they won't pick it up. This is a problem for librarians who are trying to decide if they should buy a book for their library. If teens won't read it, why buy it?

Secondly, the quibble continues, where should the book be shelved in the library? As a novel it should be placed with other fiction books. But by placing it with fiction books, when there is so much nonfiction content to it, would diminish its value. But it can't be placed in the 300s with other civil rights or landmark court cases, nonfiction books because some of the aspects of the book are fiction. Another choice for placement would be to catalog it with other poetry books in the 800s (literature) section of the library. Oddly, the publisher did not give librarians any help because they eliminated the usual verso page on the back of the title page where there is usually some cataloging help for confused librarians.

Posted by Anne@HeadFullofBooks at 9:53 AM