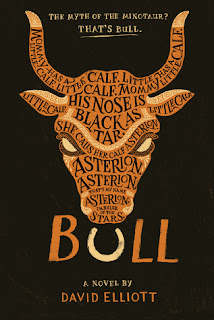 Bull by David Elliott is the retelling of the Greek Myth of Theseus and the Minotaur. first let me tell you that I am NO student of Greek gods and goddesses and though I had heard the word 'Minotaur' before I really had no idea what it was, until now.

I decided to read Bull before I went searching around for the original myth to see if I could figure out the story without a prompt, and I could. So now I challenge you to do the same. Read the book and then read the myth and you will find many similarities and several differences but you won't have any spoilers in mind. I don't want to wreck things for you. Then go visit 'Theseus and the Minotaur' at Greek Myths and Greek Mythology.

At the end of the book the author told us how he decided to rewrite this myth with the use of poetry AND he how he decided to assign a different poetical type to each character. Dang. I wish I had known that before I read the book because I certainly would have paid closer attention to the style as well as the substance. In fact, one of my students who read the book before me said that he could rap some of the poems whereas others he couldn't. I guess there is the evidence of the differences in poetic styles. So, since I don't want to give away the story-line, let me tell you what to look for in the different characters and their poetic styles.

Asterion (the Minotaur)---was assigned poems written in Italian form: eight lines lines of iambic pentameter with a rhyme scheme of abababcc. It is like a sonnet but shorter and gave the character a noble feel.

Ariadne (the Minotaur's half-sister)---was assigned poems in the Welsh form of cywdd: cuplets of seven-syllable lines, but only one of the rhymes can be emphasized. This gave her a young and chatty feel.

Daedalus (the engineer of the labyrinth)---was assigned an unnamed form with a rhyme scheme of abcd. This is a very straight-forward type of poem, one you would expect from an engineer.

Minos (the King of Crete)---and English form: the split couplet which is one line of iambic pentameter followed by one line with two beats. The beats sounded like decrees a king might make.

Theseus (son of the King of Athens sent to destroy the Minotaur)---???? I don't know what form he is assigned and Elliott didn't say, though he had very few lines so it doesn't really matter.

Poseidon (god of the sea)---he is the main god and character in the book, so Elliott did not hold him to one form or style, like the sea it was changeable. He often spoke in in rough couplets of uneven lines.

I read the book in two sittings of less than an hour each. I enjoyed the book but my discovery of the myth and the poetry styles has delighted me much more since finishing the book. I recommend it for that reason.

Posted by Anne@HeadFullofBooks at 3:57 PM