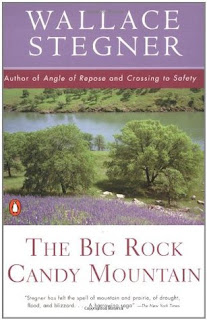 First, and I want to get this out of the way immediately, I want you to know I think Wallace Stegner was a genius, a literary genius.

Now let me back up before I get back to that point.

The Big Rock Candy Mountain, Stegner's fifth book, was this month's book club selection. Most of the gals in the club had read and liked Crossing to Safety and thought it was time we try another of his books. We opted away from The Angle of Repose because several of us had already read it. We selected The Big Rock Candy Mountain for no other reason than we had heard of it before, or maybe we thought we'd heard of it because we had heard the song. What we didn't know was how long and dense it is. To a person we all commented on how long and difficult the book was to read. I thought I'd never finish it. In fact, I started singing the old Sherry Lewis song, "This is the Song That Never Ends", but replaced the word "book" for "song." I wondered if I would ever finish the book. It took me a month of solid reading to get it done. I doubt most readers today would have that kind of patience. Why did I? Because, umm, Stegner's writing is brilliant, simply brilliant. It was slow-going but the experience was not negative at all. As the book club gathered to discuss the book yesterday we found out there are no discussions questions for it online. Ha! I think that is proof that even the publisher doesn't think the book would ever be selected by a reading group, though we did find a lot to discuss, and our discussion caused me to do some additional research on my own today.

It seems that all of Wallace Stegner's books dealt with a similar theme: the hard and painful process by which we gain our values as a culture. The lens with which we view these values is often within the family dynamics. Similar to Steinbeck's Grapes of Wrath, The Big Rock Candy Mountain is really a story which defeats the American dream.


More exactly, Stegner's novel reveals the moral and social bankruptcy of one widely held version of the American dream: the myth of raw, unrestrained individualism. This individualism attempts to conquer the land and all other antagonists, never feeling the need to conquer itself...Stegner has offered us, in the character of Harry (Bo) Mason, a man who embodies the delusory American dream in his every sinew, nerve, thought, and urge (Mason).

If you are familiar with the words to the song, "The Big Rock Candy Mountain", you know the term means a setting where there is no work, where nothing requires much effort, yet everyone can be rich just lazing around drinking alcohol from the streams and smoking cigarettes which grow on the bushes. Bo Mason seems to be forever chasing the big, rock candy mountain. And along the way, other people (his wife and children) become his victims as he chases one get-rich scheme after another. "Bo has succumbed to the myth of unrestrained individualism, and in so doing, set himself almost totally beyond the pale of 'civilized' life'" (Mason).

In direct or polar opposition to Bo is Elsa, his wife. She is kind, gentle, and steady. Where he is explosive and antsy, she is calm and nurturing. She wants nothing more to have a home for her children to grow and flourish in. As Bo gets a new bee in his bonnet, he is constantly moving his family from here to there. Bo never finds the big rock candy mountain and but the chase for it keeps Elsa from living her dream, too. "Elsa is a moral victim, and Bo is the uneasy position of moral outlaw" (Mason). He doesn't recognize that he is beaten so he never considers his misfortunes as being made by his own hand, and, therefore, never corrects his mistakes. She dies a tragic death never having her dream fulfilled.

The biggest victims of Bo were his two sons, Chet and Bruce. Chet is a lot like his dad: reckless and outgoing. After he dies young, Bruce reflects that his brother was a lot like his father except Chet was much more fragile emotionally. When he encountered problems or opposition he would crumple unlike his father who would fight or pivot to a new project. Bruce, who was much more like his mother, ends up being the only survivor, with the hopes of all the family members weighing on his shoulders.

The Big Rock Candy Mountain is described as a semi-autobiographical book. Stegner indeed was raised a dad who was chasing the American dream with his family members becoming his victims. He mother was loving, kind, and neighborly. He came to recognize that his own family experience, especially the clash between his parents comes to represent the-


Western clash between the forces of rugged individualism on one side and the forces of cooperation and community on the other. The metaphor extends to society as a whole, its pervasive conflicts of conservative verse liberal, know-nothing verses intellectual, the doctrine of getting-rich-quick verses the belief of service to others (Benson).

As this aspect of the book started to dawn on me I came to recognize the genius of Stegner. Every character, every setting, every interaction in the book served to explain the conflicts we face every day as Americans. The Mason family represented us, the American family. I also started to recognize people I know who live their lives like Bo Mason...constantly chasing an unattainable dream of potential wealth, fame, riches. I still don't understand them but I least I recognize from where the impulse derives.

Suddenly I didn't care any longer that it took a month to read the book, every moment lead to brilliant conclusion. I suspect this will one of those books I will think about and reflect on for the rest of my worth. It was worth the time it took to read it.

Here is the original version of "The Big Rock Candy Mountain" song. When Burl Ives got a hold of the book, he changed the words to make them more kid friendly (taking out the alcohol and cigarettes,)