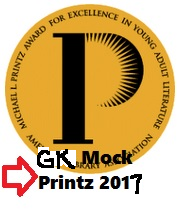 The GKHS Mock Printz event is tomorrow after school.

What books will the teens choose as their favorite YA books of 2016? Tomorrow I will know. In the meantime what are my favorites going into the event? (I don't get to vote and I try really hard to not influence the voting, either.)

I read 50 YA books in 2016 that were published in 2016, making them qualified for Printz 2017 consideration. Of the 50 books I only gave out 5 stars to six of the books. Of those, one is clearly not a YA title, Jazz Day, though it is rated for grades 5-8. So I will toss it out and hope it earns a Caldecott or Newbery Award. Another book, though WONDERFUL, is the fourth book in a series, The Raven King, and I just don't think the committee will honor it with a Printz, For this reason, I also will take it off my list. And lastly, one book which is truly the funnest book I read all year, My Lady Jane, just wasn't that well-written to make the RealCommittee cut, so sadly, I will cut it, too.

That leaves three other titles I think deserve attention from the Printz Committee (and my Mock Committee): The Passion of Dolssa by Julie Berry; We Are the Ants by Shaun Hutchinson; and Lucy and Linh by Alice Pung. I hope my teens will at least bring three titles forward for their discussion.

In addition, I looked over the titles of the 29 books I gave 4 stars. Obviously that is too large a number to digest comfortably. So I listed all of them and spent a bit of time thinking about each one. Did the book improve in my mind over time, stay the same, or diminish in my estimation of it as time has elapsed since reading it? The majority of them stayed the same, a few diminished, but eight improved in my mind. Of the two that increased the most, March, Book Three and Golden Boys, only the latter is on our Mock Printz list, Students who have read it acknowledge that the writing is excellent and the plot is quite atmospheric. Of the other six books, only two are on our list: Burn Baby Burn and The Lie Tree. Both of these books have been getting a lot of attention in the blogosphere and I'll be interested to hear what the students think of them.

As in previous years several of the potential front-runners for potential Printz books aren't on our Mock Printz list. It is difficult to select a static list before the end of the year and catch all the good titles, some of which weren't even published before we created our list in September. One title which I read and liked, The Sun is Also a Star, is deserving of Printz attention. Two other titles which I haven't read, Scythe and The Female of the Species have also earned a lot of praise from other bloggers. Unfortunately my Mock Printz team won't be able to consider these titles tomorrow as they debate on and vote for their favorites.

If you could vote for your favorite YA books published in 2016, what titles would make your list?

I'll come back tomorrow and report on the results of the GK Mock Printz Workshop. Stay tuned.

Posted by Anne@HeadFullofBooks at 8:58 PM