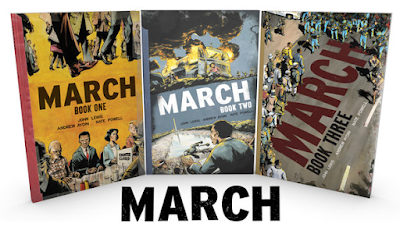 A few days ago March, Book Three was named the Printz Award-winnng book of the year. It also won the Coretta Scott King Author Award, The YALSA Excellence in Nonfiction, and the Sibert Information book of the year. Prior to winning these four awards, it had already won the National Book Award in November. Five awards for a tremendous book and an even more tremendous American hero, John Lewis.

Before John Lewis was a national politician, before he was a civil rights leader, before he was a member and a leader in SNCC (Student Nonviolent Coordinating Committee), he was just a black kid growing up in rural Alabama. One day in 1958 he read a comic book, "Martin Luther King and the Montgomery Story", which changed the whole trajectory of his life. After reading the comic he decided he wanted to do something to help his people, like Martin Luther King was doing. And the rest is history. He went on to help plan and implement nonviolent actions to show the world the horrors of racism, like lunch counter sit-ins and bus boycotts. He eventually ended up marching with MLK on that fateful march from Selma to Montgomery which finally led to the Civil Rights Act of 1964 and a year later, The Voting Rights Act of 1965. During the course of his time as an activist he was jailed over 40 times. He had his skull fractured during one march and nearly died from his injury.

John Lewis, nearly eighty years old, has been a US Representative from Georgia since 1987. He continues to fight for the rights of all people who are down-trodden or who experience racism or discrimination in their lives. When he was approached about his biography, he decided he wanted it to be a comic, like the one which inspired him to activism so many years ago. Apparently his colleagues in Congress scoffed. Why would a man with such standing in the government want his life memorized in a comic book? The answer is clear. Lewis wanted his message to be accessible to all readers.

March is a three-book set. March, Book One starts at Lewis's childhood in rural Alabama, a life-changing meeting with Martin Luther King, Jr. and the beginnings of the Nashville Student Movement. March, Book Two covers events in Lewis's life related to the Civil Rights Movement. He becomes involved in SNCC and is eventually named as one of the "Big Six" Civil Rights leaders.

This volume, March, Book Three, starts with the bombing of the Baptist church in Birmingham which killed four young girls on their way to Sunday School. From there we are led through many of events which led to the final culmination of the March on Selma with MLK. Throughout the book there are quick flashes forward in time where we see Rep. Lewis at the inauguration of the first black president, Barack Obama, and we come to recognize the importance of this in terms of all the work that went before the event.

It is a very inspiring memoir about a truly inspiring man. A few days before the book awards were announced, John Lewis once again came under attack, this time by our soon-to-be-new-president, Donald Trump, because he said he would be boycotting the inauguration. In two tweets Trump said:


“Congressman John Lewis should spend more time on fixing and helping his district, which is in horrible shape and falling apart.” Trump also said Lewis is “all talk, talk, talk — no action or results.”

Obviously the president hasn't read MARCH, or he would know what he just tweeted was wrong, wrong, wrong. It is unlikely there is any man alive who has done more for the people of his district and all America.

Andrew Aydin co-wrote the text of March and Nate Powell did the illustrations. They are a remarkable team. I must stress how important this memoir is. Read all three books in the set. They saved the best for last but, as with many things in life, one must embark on a journey before arriving at the destination.