The Brief Wondrous Life of Oscar Wao...a review of sorts 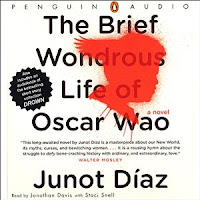 I've been thinking about the title of the 2008 Pulitzer Prize winning book The Brief Wondrous Life of Oscar Wao by Junot Diaz. Well, to be honest, I have been thinking about the term "wondrous" in context to the book. "Brief" and "life" speak so plainly to us. Before we even start reading we know that Oscar Wao has a short life or a fleeting existence. We expect his early death. But "wondrous?" Now there is a word not often used. Its placement in the title sets the reader on a mission---to find those moments of wonder and beauty among all the hum-drum, day-to-day doings of life.

After having my socks knocked off by The Goldfinch (Tartt) and All the Light We Cannot See (Doerr) both recent Pulitzer Prize winners, I decided to embark on a little personal challenge to read more books from this select list of prize winners. The Brief Wondrous Life of Oscar Wao seemed like a natural book to start with since I had read some of the book at an earlier time and always meant to get get back to it. But as I started it for the second time I realized this was not going to be a reread for me as I could only remember the sketchiest of details. As I started the book from the beginning I opted to listen to the audiobook, read by Jonathan Davis and Staci Snell. I always find it helpful to listen to books which use a lot of foreign words, in this case Spanish words, more specifically Spanish words with a Dominican Republic dialect/accent.

Before The Brief Wondrous Life of Oscar Wao, the only other published work by Junot Diaz was a collection of short stories titled Drown. Several of those stories were published in literary magazines like the New Yorker, so Diaz wasn't a complete unknown to the literary world. Wao was his first novel which makes winning the Pulitzer Prize all the more remarkable and the fact it took him eleven years to write. I'm pretty sure his publisher was sweating bullets waiting for it. But the wait was worth it because Wao burst on to the scene and pretty much rocked the literary world in 2007.

So what are a few wondrous things about the book? Though the title of the book makes you think it is mainly about a fat, Dominican-American kid, nicknamed Oscar Wao, living in New Jersey. It really is a much more than that. It is a story of a family who emigrated from The Dominican Republic and their assimilation into American society. It is also "explores themes of racial and national identity, while questioning commonly held assumptions about masculinity. It also deals, quite successfully, with the nasty legacy of the dictator Rafeal Trujillo. And it does all this while interweaving the traditional genres of nerfdom-Sci-Fi novels, fantasy comic books, and Japanese anime" (Shmoop). If this wasn't wondrous enough, the reader won't have any idea who the narrator is until well into the second half of the story. Or, I should say, who the narrator is for most of the book, because there are a few narrators interspersed throughout the narration.

Another aspect which weaves its way through the story-line is the notion of fuku, or the Curse or Doom of the New World. "No matter what its name or provenance, it is believed that the arrival of Europeans on Hispaniola unleashed fuku on the world, and we've all been in the shit ever since" (p.1). Everyone in Dominican Republic knows someone whose life has been destroyed by fuku and it was really obvious "that Truijillo and fuku were tight" (p. 3). Oscar and his family had long believed their family was under a fuku curse and they all strived, in their own ways, to survive and lift it.

Reading Wao is a bit tricky. First there are lots of footnotes, which just get incorporated into the story seamlessly in the audio version (another reason to listen to the book rather than read it.) Secondly, as I mentioned before, there are several narrators and it is not always obvious who is speaking. Also Spanish words are sprinkled throughout the narration with no translation provided. This is usually a problem for me but I was able to relax into it and get the general drift of meaning from context. The language is so important to the immigrant story, after all. Isn't our cultural identity wrapped up in the language of our family and our ancestors? In a lot of ways Diaz is asking us through Wao what home means and how do we get back to it once we have left. The term diaspora is often used to describe the experience of leaving one's homeland. And in Wao we find, one can find the way back home.

I went into my reading experience with Wao pretty ignorant. I hadn't read any reviews and only knew the barest of summaries by reading what information was provided on the back of the book (or CD case, as it were.) My expectations were pretty high merely because I knew it had won the Pulitzer but for no other reason. For this reason I felt almost bowled over by the story, or swept away by it. It was as if I was in Dominican Republic during the tortuous days of Tujillo, or sitting in the bedroom in Patterson, New Jersey of a lonely, overweight boy who wanted nothing more than to have a girl friend but couldn't stop himself from speaking and acting like the nerd he was. I tried to imagine what it would be like to live under a curse, real or imagined it would have tremendous power, I am sure. In the end Oscar, his sister, and Yunior, our narrator, all find a way to triumph over fuku. Thank goodness.

Don't be afraid of The Brief Wondrous Life of Oscar Wao. Just jump in and go with it. Read, listen, laugh, cry. Allow yourself to experience it. And like Oscar you may also find your way home. Along the way I promise you will have a wondrous experience.

Note: I wanted to provide you with a link to an audio clip of the book. All I found after a cursory look around the Web, was a YouTube video of a high school teacher reading the first few pages aloud. He cautions his students, and I will caution you, to be prepared for some pretty rough language and lots of sex. You've been warned.