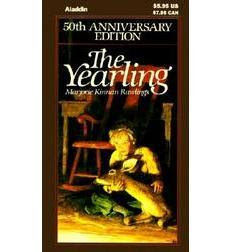 The Yearling by Marjorie Kinnan Rawlings won the Pulitzer Prize in 1939. Since that date school children everywhere have read and loved the book, or struggled through it, I imagine.

The summary of this classic novel on Shmoop is tongue-in-cheek, "The Yearling is nothing more than your classic 'Boy Meets Deer, Deer Eats Boy's Family's Corn, Boy Shoots Deer' story. What more is there to say?" There actually is a lot more to say, as Shmoop admits in their next paragraph. It is the story of a young, lonely boy, Jody Baxter, who lives with his parents in the scrub land of Florida some time after the Civil War. His family is impossibly poor and they are eking out an existence on what they can grow and hunt. Jody is very lonely even though he and his father work together every day on most tasks. If only he could have a bear cub, a baby raccoon, or a deer for a pet, he thinks he won't be so lonely. The odd thing is he never wishes for a puppy or a dog. A dog makes sense to me as a pet, not a wild animal. The book covers the themes of coming-of-age, adventure (bear hunts), survival (poisonous snakes, storms), death, and family loyalty.

The author, Marjorie Kinnan Rawlings, referred to her book as a "brief and tragic idyll of boyhood." It certainly was a year when Jody Baxter moved from boyhood to manhood. In the first chapter of the book Jody builds himself a little toy flutter by the creek and lays in the dirt to watch it spin. This scene sets the stage for the reader's understanding of what a boy Jody was at the time. playing alone, When he should have been working by hoeing the field, he was enjoying a moment of childish reverie. In the last chapter, after the difficult year, Jody once again stops by the creek and makes a toy flutter but this time it has lost all its magic for him. Rawlings acknowledged her book was about a common literary theme, man adjusting to his physical environment. In her character Jody we find such wide-eyed awe and wonder. We see nature through the eyes of a twelve year old boy who is just waking up to its beauty. But nature isn't always beautiful and kind. It is often harsh and unrelenting and Jody learns this as the year progresses.

The setting in The Yearling, the scrub land of Florida is described beautifully by Rawlings. It is impossible to read this book and not to be able to picture the setting. Every blade of grass, pine tree, and swamp is so vivid through Rawlings' words. Rawlings, who lived in this part of Florida at the time, spent lots of time listening to the dialect of her neighbors also and included it in her novel as the speech patterns of the characters. I imagine children reading The Yearling today having difficulty with the language, which would be helped if portions were read aloud so they could hear the dialect.

Before Rawlings began writing The Yearling, her editor at Scribner, the legendary Maxwell Perkins, who was editor for Hemingway and Fitzgerald, proposed that she write a book that would appeal to readers young and old. "Measuring his words carefully, Rawlings replied, 'Do you realize how calmly you sit in your office and tell me to write a classic?' No doubt Perkins knew what he was looking for. What is remarkable is that Rawling delivered on his request" (from the book's Afterward). She did indeed write a classic. A book which has stood the test of time, in addition to winning all the accolades of its day by winning the Pulitzer Prize for fiction and having a movie made from its pages.

Lois Lowry, the author of The Giver, remembered her first experience with The Yearling as "the first time I slid so effortlessly into the landscape of a novel." She has returned to the book time and again even as she became a celebrated author herself. Many other authors identify The Yearling as their favorite novel from their childhood (NEA). I am not sure I would consider this book a personal favorite but I certainly recognize its brilliance. Parts of it really bugged me, the killing of predator animals especially, but I had to remind myself when this book was written and the abject poverty of the characters. The ending is so sad and poignant. Jody is forced to kill his pet and in the process he is forced to grow up. Sadly, all of us have to pass through childhood and have to confront our lives as adults. "Somewhere beyond the sinkhole, past the magnolia, under the live oaks, a boy and his yearling ran side by side, and were gone forever." Doesn't that just make you want to weep? Not for Jody, but for yourself by remembering the carefree days of your own childhood replaced by the responsibilities of adulthood?

Posted by Anne@HeadFullofBooks at 6:11 PM