Symphony for the City of the Dead by MT Anderson 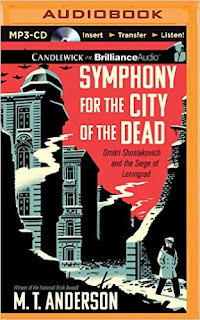 M.T. Anderson has been writing fabulous YA literature for the past decade. In Feed, his 2002 National Book Award finalist novel, all characters only seem to care about is buying the latest fashion item or have the popular body tattoo applied, even though their world is falling into a state of environmental decay. One is left with a chilling feeling that this may very well become our future world. From this bleak future, Anderson swings his attention next to a book which deals with the past. His National Book Award winning/Printz Honor book The Astonishing Life of Octavian Nothing, traitor to the Nation, The Pox Party, looks at the life of an African-American man during Colonial times who is doubly exploited as a slave and as a test subject.

Now with Symphony for the Dead: Dmitri Shostakovich and the Siege on Leningrad M.T. Anderson applies his incredible writing skills to his first YA nonfiction book. This book, too, seems destined to win awards as it has already been named to the 2015 National Book Award longlist for Young People's Literature. About the book, a committee member said, "Symphony for the City of the Dead is a masterwork thrillingly told and impeccably researched."

Symphony for the Dead: Dmitri Shostakovich and the Siege on Leningrad is not only the story of the famous Russian composer Dmitri Shotakovich and his experiences in the city of his birth, Leningrad, during the almost 900 day siege during WWII. The book also covers the horrific climate in Russia known as The Great Terror in the late 1930s under Stalin. Shostakovich and other artists, authors, and musicians were especially scrutinized by the Stalin Regime, many even lost their lives. Russia was a terrifying place to live during this time period.

When the Nazis made their way to Leningrad and began what came to be the longest siege in recorded history, Shostakovich and his family were trapped along with more than 2 million residents of the beleaguered city. During this time he began writing his 7th symphony. Bombs would be exploding overhead and this bespectacled composer would rush back from the shelter to continue work on his masterpiece. Finally, after he had written more than two of the four movements of the symphony, he and his immediate family were finally evacuated  to a safer spot far to the east. Before leaving Leningrad, however, he went on the radio in Leningrad and told his countrymen to keep the faith and explained how he was writing them a symphony. Everyone was wild to hear it. It was performed in Moscow and even America before it was finally performed in Leningrad by a ragtag group of starving musicians left behind in the city.

Listen to the 3 minute BBC clip about Shostakovich and his 7th symphony. There is an on-going pesky question, which will never be answered, if Shostakovich really wrote the 1st movement about the Nazi invasion or about The Great Terror under Stalin. The mysterious question will keep people interested for decades to come.

Symphony for the Dead: Dmitri Shostakovich and the Siege on Leningrad is my favorite type of YA book. I learned so much about Russian (Soviet) history in addition to the information on the book title. I was aghast by what I learned, too. Much of the information didn't come to light until the fall of communism in the 1990s. Since I attended high school before that time period, I will give myself a break for not knowing this information before.

My husband and I listened to the audiobook of Symphony read by M.T. Anderson himself. Interspersed throughout the story were little audio clips (teasers) of Shostakovich's music. I was in heaven: 1. Anderson did a phenomenal job reading his own work; and 2. the music!  Oh my. What talent.

Symphony for the Dead is my favorite YA nonfiction of the year, by far. It may actually be my YA favorite book of the year. I got so much out of it. It truly was "thrillingly told and impeccably researched."

Rating 5 out of 5.
Source: MP-3 Audiobook, Candlewick on Brilliance Audio, 2015. I purchased my own copy.

Posted by Anne@HeadFullofBooks at 4:53 PM