First published in serialized All the Year Round, Dickens' own literary magazine, between Dec. 1860 and August 1861.

The plot in a nutshell: Pip, an orphan, lives with his sister and her husband who is a blacksmith. Everything in his life seems laid out for him with the likelihood he too will become a blacksmith. Two events change the trajectory of his life. First he meets and helps an escaped convict on the marsh one dark day. Secondly, he is introduced to the odd Miss Havisham and her adopted daughter Estella. Pip has a huge crush on Estella even though she is mean to him. Later, Pip learns he has been given a living which will allow him to leave his crude life of smithing behind and move to London to become a gentleman. After years of living off this anonymous benefactor, Pip learns to whom he is indebted. Pip is baffled and horrified. Things don't turn out as he planned and he learns about the importance of love and family along the way.

Hilarious video with no spoilers:
http://www.shmoop.com/great-expectations/

Hilarious video with TONS of Spoilers....in fact the whole thing is a spoiler:
http://www.shmoop.com/great-expectations/summary.html

My opinion: I thought I knew the basic outline of the story before I started reading Great Expectations, but I discovered I basically had had no idea what the book was about.  For that reason I am glad I read listened to it. It was an easy book to follow and though I am not sure I would assign the word "love" to my feelings about the book I did like it and enjoyed reading it.  Plus, bonus...I can now say I have read some Dickens! Yay.

Funny listening to audiobook story:
I purchased a very inexpensive audiobook which contains audio for both Great Expectations and A Tale of Two Cities. When I slip audio CDs into my car's CD player it usually displays the CD number and the track number.  This cheap set got all confused and displayed titles for things not playing like symphonies from various composers or books by other authors.  It was really odd and ultimately funny. My example photo isn't very funny. usually the info wouldn't even mention Dickens. 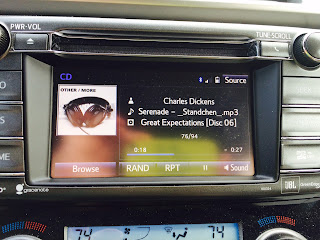 Posted by Anne@HeadFullofBooks at 8:36 PM