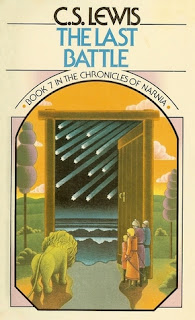 My daughter and I finished reading the last book of the Chronicles of Narnia series, The Last Battle, this past week while on vacation.  Like the other books in the series I had forgotten some of the details of the book but not the feeling-tone at the end. It makes me want to sigh with satisfaction.


The last battle is the greatest battle of all. Narnia... where lies breed fear... where loyalty is tested... where all hope seems lost. During the last days of Narnia, the land faces its fiercest challenge - not an invader from without but an enemy from within. Lies and treachery have taken root, and only the king and a small band of loyal followers can prevent the destruction of all they hold dear in this, the magnificent ending to the Chronicles of Narnia.--Goodreads

Once again we meet our friends, Jill and Eustace, called back to Narnia to help King Tirian as he struggles to right his kingdom from a terrible wrong...someone is impersonating Aslan and the kingdom is falling apart.

In all the volumes of this series religious symbolism is sprinkled throughout, but if one isn't looking for it, it would be possible to miss it.  In this volume, as Narnia comes to a close and our friends are desperate to save it or find the real Aslan, the religious symbolism can't be missed. And it is lovely and comforting---making the whole book, the whole series worth the time to read it. I'm not sure if I can explain it adequately to express how much this book touches me, right to the core of my existence.  Here are a few quotes that might be helpful in making my point:

After the old Narnia is no more, our friends meet Aslan again...


The air grew sweeter. A brightness flashed behind them. All turned. Tirian turned last because he was afraid. There stood his heart's desire, huge and real, the golden Lion, Aslan himself, and already the others were kneeling in a circle around his forepaws and burying their hands and faces in his mane as he stooped his great head to touch them with his tongue. Then he fixed his eyes upon Tirian, and Tirian came near, trembling, and flung himself at the Lion's feet, and the Lion kissed him and said, 'Well done, last of the Kings of Narnia who stood firm at the darkest hour.'

Even folks who didn't know about Aslan were welcome in his new land...


'And then he breathed upon me and took away the trembling from my limbs and caused me to stand upon my feet. And after that he said not much but that we should meet again, and I must go further up and further in...'

The new Narnia is even better than the old...


...yet at the same time they were somehow different---deeper, more wonderful, more like places in a story: in a story you have never heard but very much want to know. The difference between the old Narnia and the new Narnia was like that. The new one was a deeper country: every rock and flower and blade of grass looked as if it meant more. I can't describe it any better than that: if you ever get there, you will know what I mean.

In Aslan's land one feels at home...

'I have come home at last. This is my real country! I belong here. This is the land I have been looking for all my life, though I never knew it till now. The reason we loved the old Narnia is that it sometimes looked a little like this.'

And in the end, a new beginning...


And for us this is the end of all the stories, and we can most truly say that all lived happily ever after. But for them it was only the beginning of the real story. All their life in this world and their adventures in Narnia had only been the cover and title page: now at last they were beginning Chapter one of the Great Story, which no one on earth has read: which goes on and on forever: in which every chapter is better than the one before.

I hope, in the end that I also hear "well done, faithful servant" and that I am allowed to go further up and further in to a land where the story, the Great Story, is just beginning.

Read the book, it is wonderful.  Read the whole series. You won't regret it!

Posted by Anne@HeadFullofBooks at 1:09 PM