Review: A Confederacy of Dunces by John Kennedy Toole 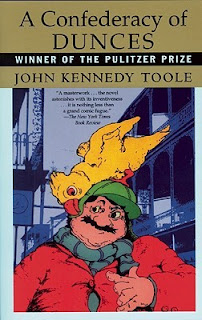 In 2006 the New York Times Book Review editor, Sam Tanenhaus, sent out requests to hundreds of writers, editors, and literary know-it-alls asking them to identify "the single best work of American fiction published in the last 25 years." (NYT) As most people predicted Beloved by Toni Morrison won, but down the list a little ways was A Confederacy of Dunces by John Kennedy Toole, along with novels by Philip Roth, John Updike, Don DeLillo and many other literary bigwigs. Not bad for a book rejected by many publishers before finally being published posthumously in 1980, probably due largely to the doggedness of Thelma Toole, the author's mother. Of course, a little kerfuffle arose about whether Dunces even should be allowed on the list since it was written by Toole in the 1960s outside the 25 year range. Nonetheless, it made the list and deserves to be on it!

Several years ago a 12th-grade boy approached me in the library asking if I would consider purchasing a book called A Confederacy of Dunces. He had heard some good things about it and wanted to check it out. I did a little research and decided to get the book. I don't remember if the boy ever came back and told me what he thought of it. I wish I could go back in time and ask him, now that I've experienced the book myself.

I used the word "experienced" rather than "read" A Confederacy of Dunces on purpose.  My husband and I listened to the audiobook which was read by Barrett Whitener. What a fun experience! Whitener did an excellent job with the varied and unique New Orleans dialects and accents. The two characters that I thought he did especially well were Ignatius J. Riley and and Burma Jones (more on them later.) The dialogue in this comedic farce is often funny, but when it is spoken aloud it becomes hilarious. Don and I would laugh out loud as we listened and then would repeat funny lines to each other later. My husband became very adept at making announcements as if he were Ignatius J. Riley. All of them started with "Oh my gawd..."

After nobody loved this book, everybody loved it. In 1981 it won the Pulitzer prize for literature. It has sold over 1.5 million copies and been translated into 18 languages.  I wonder if the translations catch the nuances of the humor? At any rate it is a very funny and quirky book.

Ignatius J. Riley is about the most disgusting character imaginable. He is a fat, lazy, demanding, thoughtless slob who wants to spend his time, in his own words "writing a lengthy indictment against our century. When my brain begins to reel from my literary labors, I make an occasional cheese dip." His pyloric valve occasionally closes up because of a lack of  "proper geometry and theology." He is mean to his mother, Irene Riley, and can't seem to even hold down the easiest of all jobs -- filing clerk and hot dog vendor -- even though he has eight years of college under his belt. His once-girlfriend, Myrna Minkoff of New York, thinks Ignatius needs sex and that will cure all his problems. At some point, an empathetic reader may stop viewing Ignatius as simply a pig-headed oaf and begin to understand that his character is defined by unacknowledged mental illness, which adds an element of sadness to the accounts of his interactions but does not diminish the humor. Ignatius is by definition the hero as the principal male character in the story, but he is far from a man of distinguished courage or ability. Everything in the story centers around Ignatius and in the end things turn out amazingly well, thanks to him.

There are so many funny lines in the book it is hard to pick one to give you an idea of the flavor of it, but here is one that I think is especially good:


Between notes, he had contemplated means of destroying Myrna Minkoff but had reached no satisfactory conclusion. His most promising scheme had involved getting a book on munitions from the library, constructing a bomb, and mailing it in plain paper to Myrna. Then he remembered that his library card had been revoked.

Burma Jones is an underpaid janitor at a sleazy nightclub who is attempting to steer clear of being arrested for vagrancy. In the book's forward, Walker Percy says this about Jones: "---and one black in whom Toole has achieved the near-impossible, a superb comic character of immense wit and resourcefulness without the least trace of Rastus minstrelsy."

Nearly every other character -- and there are lots of characters in this book -- make small entrances and exits before circling back to enter the story again and again. Toole did a brilliant job weaving all the characters and the storylines together. In fact, Toole did a brilliant job with Dunces. Period. Everything about it is funny and poignant at the same time. Walker Percy describes the book as more than a comedy, because a comedy "implies simply a funny book, and this novel is a great deal more than that. A great rumbling farce of Falstaffian dimensions would better describe it." But he goes on to say that there is a sadness to the book, too.  Whether it is a sadness about Ignatius' rantings and ravings or about the fact that Toole committed suicide ten years before the book was even published. I'd say both.


It is a great tragedy that John Kennedy Toole is not alive and well and writing. But he is not, and there is nothing we can do about it but make sure that this gargantuan tumultuous human tragicomedy is a least made available to a world of readers. ---Walker Percy, in the Forward

Since finishing A Confederacy of Dunces my husband and I have continued to circle back and discuss/laugh about the book together. Now that we have read it we feel as though we have been inducted into an elite club, the Confederacy of Dunces club. From here on out we will always have a little Ignatius J. Riley running around in our heads exclaiming, when things are a little off-kilter with geometry and theology, "oh my gawd..."

Join the club. Read this amazing book or, better yet, listen to the audiobook version of it. We're glad we experienced it this way.

Posted by Anne@HeadFullofBooks at 9:42 AM