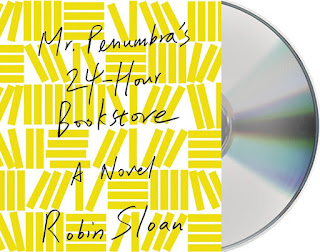 Readers of Mr. Penumbra's 24-hour Bookstore by Robin Sloan will be treated to a celebration of books AND technology. They will discover a secret society that is not out to dominate the world, or even kill anyone. In fact, this society is very interested in technology, old technology...the printing press.

Clay Jannon is an unemployed web designer. He ends up working for the odd Mr. Penumbra in his 24-hour bookstore as the only graveyard shift employee. Though few patrons walk through the doors at those late hours, half of those that do are even odder than Mr. Penumbra. All are very focused on the books they want, too, and these books are always from the way-back section of the store. Clay is warned his first day of employment to never look inside these books. Who could resist that kind of temptation? What does Clay discover when he gives in to his curiosity? Books written in code. He and his techie friends set out to help Clay figure out what is going on, maybe even unravel the mystery.

As the "plot thickens" the reader is continually confronted with the question, can technology solve all of the problems that confront us? And, do we really want it to?

Several friends suggested that I read this book, knowing that I would love it.  They were right.  For some reason I am drawn to odd-themed books full of quirky characters.  This book fulfills both of those requirements. If I can offer any criticism, it is the ending is a bit too tied up, too tidy for my taste.  I like books to leave the reader with a bit of ambiguity, allowing the brain/imagination to fill in the blanks at the end of the story. But this is a mild quibble, one that must not dissuade a single reader from choosing Mr. Penumbra's 24-Hour Bookstore as their next reading selection.

I consumed this book in the audio format. Ari Fliakos was the voice actor who does fun and quirky very well.  Mr. Penumbra's 24-hour Bookstore audiobook was produced by  Macmillan Audio in Feb. 2013.

Since Mr. Penumbra's 24-hour Bookstore won an Alex Award this year, adult books that appeal to teens, I am going to count it toward by YA Audiobook Challenge!

Posted by Anne@HeadFullofBooks at 4:17 PM