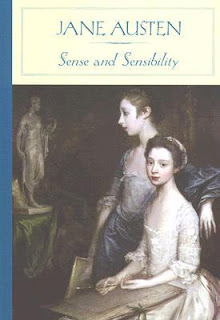 In April I finally finished reading Emma by Jane Austen.  It took me over a year to complete it, which was a ridiculous amount of time to get through the book.  But my final success is due in large part to my weekly updates, after which it took only three weeks to complete it.  With that success fresh in my mind, here I am again with another Jane Austen, Sense and Sensibility, and my first weekly update.

During my weekly updates I will report my progress, pose a question or two, and reflect on anything Austen. I promise there will be spoilers. Since Austen's books have been in publication for over 200 years I figure that most people know the general storylines, especially if you, like me, have seen the film adaptations.

A bit about this book: Sense and Sensibility was first published in 1811. Its original title was "Elinor and Marianne." The edition I am reading from is Barnes and Noble Classics published in 2003.  It is 312 pages long.

Current action: We meet the Dashwoods as their beloved father dies. the half brother John Dashwood inherits the estate, leaving Mrs. Dashwood, Elinor, Marianne, and Margaret as guests in their old house. Before being practically pushed out, they meet Fannie Dashwood's brother Edward Ferrars and he and Elinor really hit it off. There is surprisingly little dialogue between characters at this point in the book.  The women finally find a home, a cottage, they can afford on the estate of Mrs. Dashwood's cousin, Sir John Middleton. They are glad to be far away from Fannie and John but must adjust to a much scaled down life. Once they are moved into Barton Cottage they meet many friends and relations of Sir. Middleton including Col. Brandon and John Willoughby who both have their eyes on Marianne. Elinor hasn't heard from Edward Ferrars and that causes some concern for everyone.

Surprises: John and Fannie have lots of money because Fannie brought a large sum into the marriage, so it is surprising how stingy they are with his half sisters once their father dies. Once the Dashwoods move to Barton Cottage we meet not only Sir John Middleton, but his wife, and his mother-in-law. In the Emma Thompson version of the film there is no wife. The wife is a very single-faceted person and isn't very nice or warm to the Dashwoods. The last two surprises are small but somewhat significant.  First, Marianne brings her pianoforte with her to the cottage. All film versions I've seen show her wanting in this department.  And secondly, Willoughby gives Marianne a horse, even though they can't afford to feed it. Proof of how self-centered he is.

Questions: Have you read Sense and Sensibility? Where does it rank for you among the Austen novels?

Comment: Since I am just getting started, I'd love for you to join me. You'd only have to read an extra 50 pages this week to catch up.  Be sure to check on my progress weekly.

Posted by Anne@HeadFullofBooks at 5:40 PM