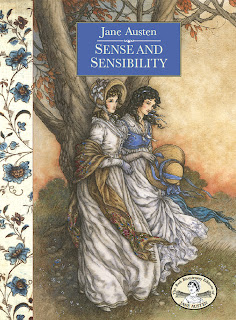 Thoughts about the book: I've never noticed before how short the chapters are. I wonder if all Austen's books have similarly short ones.

Current Action: Col. Brandon cancels the planned excursion to Whitwell at the last minute which piques the curiosity of Mrs. Jennings. Willoughby suddening leaves the area and Marianne is left bereft. Everyone thinks they must have had a lover's quarrel because they must be engaged. Edward shows up unannounced for a week-long visit. After he leaves Mr. and Mrs. Palmer come to visit the Middletons at Barton Park. Mrs. Palmer is Mrs. Jennings' youngest daughter. While in Exeter the women meet Lucy and Anne Steele and invite them for a visit. Eventually Lucy confesses to Elinor that she and Edward are secretly engaged.

Surprises: After Willoughby suddenly departs, Marianne is so depressed that all she will do is go for walks and play the pianoforte and only songs she played with him.  Remember, in the movie that she did not have a pianoforte at this point.  I had no idea that Edward Ferrars came to Barton Cottage at this point in the story. He had come from Plymouth and he was in very low spirits. Mrs. Jennings figured out that this must be the elusive Mr. F and teased Elinor about it.  She even said something, later in the story, about Edward and Elinor to Lucy Steele.

Question: Everyone seems to know how much everyone else is worth a year and they talk about it freely.  Col. Brandon has a meer $600-700 per year, The Dashwood women $500, Willoughby was set to inherit $2000/year. Do you think that people in Austen's day really discussed the finances of others so freely, or do you think that Austen just added this to make a point?

Posted by Anne@HeadFullofBooks at 10:36 AM