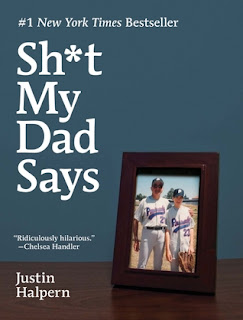 In honor of Father's Day I decided to review the book, Sh*t My Dad Says by Justin Halpern, a book that my husband and I read together last year.

At the age of 28 Justin Halpern lost his job and had to move home to live with his parents. As an adult he started to view his Dad's pearls of wisdom for the humorous things they were. He started a Twitter page to share his father's witticism with his friends. The Twitter page, by the same name as the book, went viral in no time.  And it is no wonder.  The book is hilarious, and quite often, profane.  My husband and I would take turns reading the book aloud to each other and howling with laughter.

Here are a few of the cleaner quotes I found from the book:


ON A LEGO CREATION: "Listen, I don't want to stifle your creativity, but that thing you built there, it looks a pile of sh*t."

ON THE DEATH OF OUR FIRST DOG: "He was a good dog. Your brother is pretty broken up about it, so go easy on him. He had a nice last moment with Brownie before the vet tossed him in the garbage."

My dad's witty comments were never profane, but I think some of them are gems anyway.  So in honor of Father's Day here are a few quotes from my Dad:


EVERY TIME WE HAD PANCAKES OR WAFFLES: "Have you heard of the English lord Sir Rup?"

BAD TABLE MANNERS: "Anne, Anne, strong and able, get your elbows off the table." (This was sometimes accompanied by a poke in the wrist with the fork tines.)

IF HE WAS REALLY ANGRY: "Oh Fudge!"  or "Oh Fiddlesticks!"

IF I DIDN'T USE GOOD JUDGMENT: "If you think that, you have another think coming."

Ha-ha. Now I find myself repeating these to my kids.

Thanks, Dad, for sharing your wisdom and love with me.

Posted by Anne@HeadFullofBooks at 5:27 PM