Review: Brave Face: How I Survived Growing Up, Coming Out, and Depression 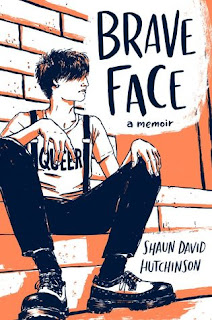 As a teen librarian I want to thank you from the bottom of my heart for this book, Brave Face, where you recount the perils of growing up, coming out, and your struggles with depression.

When I first became a high school librarian I didn't realize how few books there were available for teens who were questioning their sexual orientation until I looked closer at my collection. Over the years I have tried to purchase books which I think will speak to all students on a variety of topics, but the LGBTQ selection still seemed thin or too specific. I might find a book about conversion therapy, or religious bigotry against gays. A book where a lesbian character was also a predator or another where a gay character was successful in drama were on the shelves. Each seemed to fill a niche but didn't speak broadly to questioning teens at my school.

In Brave Face I recognized so many of my past students and I wish that I'd had this book to hand them. Two important ideas came out of your book for me. One, build a community of supportive friends and be open and honest with them. You seemed to push your friends away just at the point that you needed them most. Your honesty about how your own self-loathing compelled you to do the exact opposite of what you needed/wanted is a powerful message to others who feel the same way. Secondly, you came to understand that being gay and being depressed were two different things. That must have been a freeing revelation for you to realize. I'm sure that your low self-esteem contributed to your depressive feelings but being queer didn't mean you had to spend the rest of your life depressed. I am positive that many students have married the two concepts in their minds and like you wonder if life is worth living if it is always going to be a downer. Thank you for stating the obvious. Hearing it clearly spoken in the book divorces the two and allows the teens to seek help for their depression in constructive ways.

Your openness about your suicide attempt must have been very painful to write. I just wish you had given the reader a fuller idea about the helpfulness on talk therapy and aspects of your recovery. In placing the suicide hotline and other national helpline numbers at the beginning of the book, instead of at the end, was genius. Some desperate person might not have the initiative or focus to read a whole book to find what they need at the end. Thank you.

By the way, I really like your fiction, at least the books I've read. I really wrestled with We Are the Ants. Was the kid really abducted by aliens or was he so messed up it just seemed like he was? I've been pondering that question for a long time. The Apocalypse of Elena Mendoza was brilliant. I love magical realism so I had a blast with that book. When I checked to see what other books you've written I find you've been quite prolific so I best get moving if I want to read more books by you.

Thanks again for Brave Face. You wrote a much-needed book and I hope it finds a home in libraries everywhere.