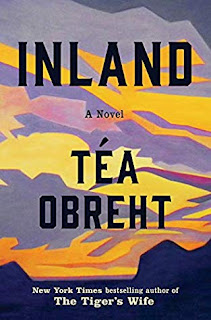 
When those men rode down to the fording place last night, I thought us done for.


Josie, for all her intermediary powers, had turned out to be devoid of the only gift that might have been of use: divination.

Summary: The year is 1893. The setting is a waterless farm in Arizona Territory where lawlessness reigns. It is here that two character's stories converge. First there is Nora, who is a frontier woman and is trying to keep everything and everyone together despite the lack of water. Her husband left a few days before in search of water, and her eldest sons have also left home after a terrific fight. Nora and her youngest son remain behind with her mother-in-law, and Josie, the hired help who can speak to dead people, and is full of other superstitions. Josie is the one that put the idea into Nora's youngest son's head that a mysterious beast is stalking their land.

Secondly, there is Lurie. His story has a much larger arc than Nora's, starting years before when he and his father immigrated to America from Armenia. Through a series of mishaps Lurie is on the run from the law, but he always seems to stay one step ahead of being captured. When he links up with an Army troop that is using camels as part of its mission, he finds the animals to good companions. Eventually he finds himself wandering all over the west with one camel in particular. In 1893 he and the camel end up in Arizona Territory about to meet up with Nora and her family.

Reviewing the book for the New York Times, Channelle Benz thinks there is a third main character:  the West.


As it should be, the landscape of the West itself is a character, thrillingly rendered throughout in phrases such as “red boil of twilight” and “a stillness so vast the small music of the grasses could not rise to fill it.” Here, Obreht’s simple but rich prose captures and luxuriates in the West’s beauty and sudden menace...Inland has the stoic heroic characters and the requisite brutal violence of the Western genre, but the decision to place an immigrant and a middle-aged mother at its center is a welcome deviation.

Review: The beginning of this book is completely confusing. As the story shifts back and forth from Nora to Lurie and back again, the reader is not only experiencing a perspective shift but also a jump back and forth in time. It is disorienting. Lurie's story is a long one, lasting almost a lifetime from the point he enters the country until fifty or sixty years later in Arizona. Nora's story takes place over the course of one day. While reading I not only had to figure out who was speaking but when and where the action was taking place.

About a third of the way through the book I thought I wouldn't be able to do it, that I would need to just set the book aside and not finish it. Then I went to Goodreads and read a few reviews. Everyone who loved it had finished the book, everyone who hated it hadn't finished it. There had to be something that draws the two stories together making it worth the effort to read on. There was. The ending of the book is so spectacular and surprising it took my breath away. It was both sweet and creepy at the same time. I remember clutching my chest thinking I needed to get a hold of the print edition so I could read it over and over again. (I was listening to the audiobook.) The writing was simply brilliant and three narrators did such a spectacular job I simply had to keep going.

Based on a little known historical fact that our Army did indeed use camels for a while during the wars in the West, Obreht has created a masterpiece. If you are a patient reader, not prone to throwing books away if they don't captivate you from the start, I highly recommend this one.

Book Beginnings on Friday is hosted by Rose City Reader. Share the opening quote from current book.The Friday56 is hosted at Freda's Voice.  Find a quote from page 56 to share.


Posted by Anne@HeadFullofBooks at 4:07 PM