We got home from our European vacation this past Sunday. Now I am dribbling out details of the trip in installments. This is part two: Prague.


Prague, Czech Republic (September 22-25)
We flew out of London's Stansted airport on a rainy Sunday. We walked around lovely Regent's Park before leaving for the airport and then we had to stand in the rain waiting for a late bus. It felt like an ordeal getting out of U.K. but it was a warm welcome arriving in Prague several hours later met by a driver hired by our hotel. My sister and brother-in-law, Kathy and Tom, met up with us in Prague. They had been in Norway visiting relatives. We traveled together for the rest of the vacation.

Our first full day in Prague started early as we were met at our hotel by Wilma, our Czech tour guide, at 9 AM. Wilma was tasked with showing us the highlights of Prague for two days of six-hour long walking tours. My poor feet! But what a wonderful, beautiful city. Prague was not bombed during WWII so the architecture is all authentic, displaying beautiful and interesting examples of art nouveau, art deco, and Czech cubism.

After our initial introduction to the city Wilma had us hop onto a tram which took us to a hill which housed the Stahov Monastery and library. The monastery was started in the 1100s and the library must be on some list of the most beautiful libraries in the world. We all gaped at it while Don, the only one with permission to take photos, ran around getting as many shots as he could. 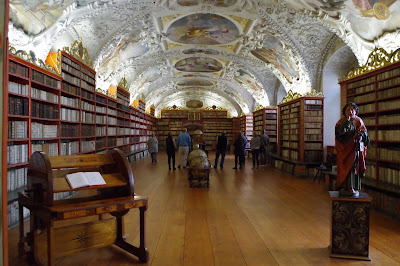 From the monastery we continued our walk to an overlook of the city. In the background is Petrin Tower, built to look like the Eiffel Tower but not as tall or as grand. From the overlook we could also see the Charles Bridge, a famous pedestrian bridge from which many photos of Prague are taken. We made it to the Prague Castle in time to witness the changing of the guard ceremony and because we were there at noon, a military band played music as part of the ceremony. 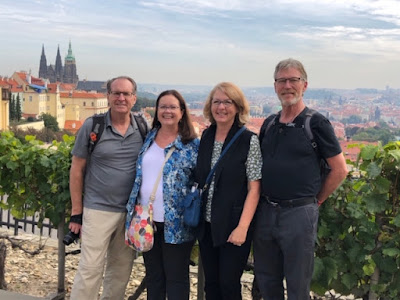 The big cathedral in Prague wasn't finished until sometime in the 20th century. The stained glass windows reflect a much more modern touch than we are used to seeing in European cathedrals. This window was designed by Alphonse Mucha, the famous Art Nouveau artist.
Somewhere along our tour we stopped by a little side trip to see a street where the houses were built into the old city wall. The houses are now used for small retail shops. We stepped inside several of them and were shocked by how tiny they are...giving the tiny house craze a nod.

At the end of the first six-hour walking tour, we were all grateful to sit at outdoor cafe for a late lunch and a pilsner or lemonade to drink. The meal, a bowl of goulash with dumplings and svickovah (beef in cream sauce) to share between the four of us, was probably the favorite meal of our whole trip. Delicious.
We spent some time on the St. Charles bridge checking out the strange statues where many depicted protestants in hell with Catholics lording it over them. We also checked out the many wares being sold by vendors and took a great many photos. The views of Prague from the bridge are so lovely.
Our second day of touring Prague with Wilma, the guide, we went to an old synagogue. None of us were prepared for our emotional response. 80,000 Prague Jews were murdered by Nazis in WWII. When the few survivors returned home after the war, they set up their synagogue as memorial to the dead. The names of all these people were painted on the walls with their last known date alive listed. It broke our hearts to see these names covering all the walls of the whole synagogue.

Wilma shared that Czechs tend to be sarcastic people in private. She showed us this sculpture, housed in a private business, which is proof that they don't take themselves too seriously. The man riding the upside-down horse is St. Wenceslaus who was from Prague and is their patron saint. 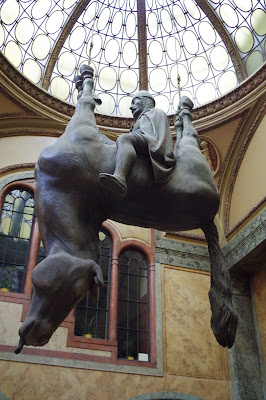 Books are celebrated in Prague. Everywhere we looked we found evidence of Prague as a reading city. 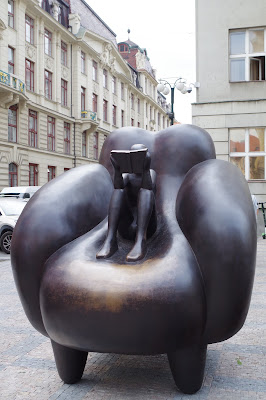 Our last night in Prague we went to a musical event at the lovely art nouveau theater for a program of  Vivaldi's Four Seasons and two other pieces. It was a lovely, lovely evening.

My biggest regret of the whole trip is that we didn't dedicate at least two more days to Prague. We were introduced to the beautiful city after two long days of walking tours but didn't have time to dig in and visit all the spots we were introduced to. If you are planning a trip, give yourself at least four days in Prague.

Stay tuned for two more installments on our trip: Bavaria and Switzerland