Review and Friday Quotes for CROSSING TO SAFETY

Book Beginnings on Friday is hosted by Rose City Reader. Share the opening quote from the book.The Friday56 is hosted at Freda's Voice.  Find a quote from page 56.

The book I am currently reading (with a summary and review): 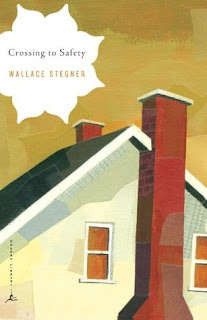 
Floating upward through a confusion of dreams and memory, curving like a trout through the rings of previous risings, I surface. My eyes wide open. I am awake.


Troubled that what started as a celebration has begun to sound tense, I hold out my Dixie cup for more champagne. "Let us be unignorable," I propose.

Summary: When Larry and Sally Morgan move to Madison, Wisconsin in the late 1930s  they know that Larry's job as an adjunct professor is for only one school year but that doesn't keep Sid and Charity Lang from befriending them and leading them through a friendship that lasts the rest of their lives. At first glance it seems that Sid and Charity have everything: charm, money, easy manners, and generosity in spades. But not long after the two couples meet it becomes clear to Larry and Sally that Sid and Charity do not enjoy a relationship of equals, with Charity being overly controlling and Sid surprisingly submissive. The story of the couples' friendship is told by Larry from the vantage point of over thirty years. The book beginning quote then sets the stage for the telling of a story which will require a lot of memories and confrontations of dreams both lost and those accomplished. The Friday56 quote comes from a time early in their friendships where Sid and Charity are celebrating their anniversary with champagne and other goodies. The day should be full of joy but tension creeps in when the subject of tenure comes up. Both men are worried about their jobs. They decide that no matter what happens they will not allow themselves to be ignored.

Review: I first read Crossing to Safety in 1996 or '97 for a neighborhood book club. I didn't last long in that club because I wasn't in the same place in my life as the other members AND I was the only one who really wanted to discuss the books we read rather than just visit. I remember being very frustrated by the light treatment the other gals gave this book because I felt the book had so much to say about friendship and relationships in general. Of course, the irony was that I wanted to be in the club to make friends and I wasn't very friendly, at least about this book.

I fell in love with Stegner's writing after reading The Angle of Repose. That book is about families but the setting, the West, is almost a character. This book, thought by many to be his finest, is very clearly a book about friendships and that value received by having close friends. Between my first reading and this reread I was surprised how much I had forgotten. I remembered Charity being bossy. I remember that a health problem befell Sally. I'd forgotten that Sid was such a pushover and that Larry was the narrator of the book. But I did retain the essence---how precious friendship it and how much it is be treasured. I had also forgotten how quotable Crossing to Safety is. I highlighted 15 passages as I read the e-book I'd checked out from the library. I highly recommend this book. I wonder if my new book club should reach back and give this one a try.

Posted by Anne@HeadFullofBooks at 6:00 PM