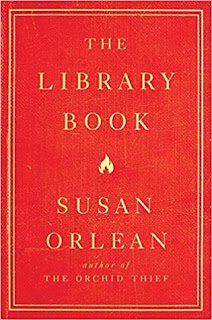 On April 29, 1986 a fire started in the Los Angeles Central Public Library. Over seven hours and 400,000 books later the fire was finally extinguished. Right from the beginning firefighters believed that the fire was started by a human with a flame in his hand, but thirty years later no one is certain who or if the fire was set deliberately.


"In The Library Book, Orlean chronicles the LAPL fire and its aftermath to showcase the larger, crucial role that libraries play in our lives; delves into the evolution of libraries across the country and around the world, from their humble beginnings...to their current status as a cornerstone of national identity; brings each department of the library to vivid life through on-the-ground reporting; studies arson...and reexamines the case of Harry Peak, the blond-haired actor long suspected of setting the fire"(Book Jacket).

What starts out as a book about a library fire with all the related topics of the arson investigation and book recovery and restoration, ends up becoming an homage to libraries and jobs librarians do cheerfully everyday in service to their patrons and society in general.

In The Library Book we met a whole cast of interesting characters. There were the librarians like Mary Foy, who in 1880 became the head of the LAPL even though she was only eighteen years old and Charles Lummis, who was a wildly eccentric adventurer and journalist determined to make the L.A. library one of the best in the world, to the modern-day librarians who, in the course of their daily jobs, make contact with the homeless in society with all their uncertainties and erratic behaviors.

Readers also meet Harry Peak and his family. Harry was in the library the day the fire started. He was acting strangely and had interactions with seven different people just prior to the fire. After he left the library on that fateful day he told friends he was there and had set the fire. But every time he told the story his facts changed. His friends chalked it up to 'Harry being Harry' since they all knew him to be a fibber and a tale-teller. All the evidence that investigators were able to gather was circumstantial so he was never brought to trial for arson though many believe he did set the fire.

The fire and its investigation form the framework of the book but Orleans takes the reader on a historical look at the LAPL from its inception to current day. She also analyzes the role of libraries in communities and the way that the goals of libraries have shifted throughout time. My favorite chapters were the ones where she visited different departments in the library and learned the full range of services they provide. As a school librarian I wore many hats but one of them was not to be an archival service. When a book was old or spoiled, I just weeded it out and moved on. I did not keep 'old' items like maps, collections, first editions, etc. I found the work of these departments to be very fascinating.

Up to this point this review is making the book sound boring. It wasn't. It was full of inspiring quotes about books, reading, libraries, and librarians. Here are a few of my favorites with a little editorial comment from me:


The publicness of the public library is an increasingly rare commodity. It becomes harder all the time to think of places that welcome everyone and don’t charge any money for that warm embrace.

Every time I step into a library I am aware of the humanness of the place. All libraries worldwide are having to figure out how to deal with issues of homelessness because the libraries are one of the few places in society where the homeless can go to be safe and warm. Even in my school, the library was a safe place for the misfits. I called them my library kids---students who ran to the library before school started each day and spent every lunch time within the safety of the its walls.


I loved the fresh alkaline tang of new ink and paper, a smell that never emanated from a broken-in library book. I loved the crack of a newly flexed spine, and the way the brand-new pages almost felt damp, as if they were wet with creation.

Until I became a librarian I was not tuned into the smell of new books. But now I love it. There is nothing like it. I love the description that new books are "wet with creation."


"My friends think because I am a librarian, I know everything," Princenthal said to me. "We'll be watching the Olympics, and suddenly, they'll say, 'Tina, how do you score snowboarding in the Olympics?' Or out of the blue, 'Tina, how long to parrots live?' "

Students used to treat me this way, too, as if I were the font of all knowledge. My mantra became, "As a librarian I know a little about a lot of things." I guess it goes with the job.


“The library is a whispering post. You don't need to take a book off a shelf to know there is a voice inside that is waiting to speak to you, and behind that was someone who truly believed that if he or she spoke, someone would listen. It was that affirmation that always amazed me. Even the oddest, most peculiar book was written with that kind of courage -- the writer's belief that someone would find his or her book important to read. I was struck by how precious and foolish and brave that belief is, and how necessary, and how full of hope it is to collect these books and manuscripts and preserve them. It declares that stories matter, and so does every effort to create something that connects us to one another, and to our past, and to what is still to come.”

I have long described books as things that call my name. Before I retired, I remember being alone in the library after school and having the distinct impression that the books were calling out to me---"Read me!" And then some of the oddest books I found and read became personal favorites. It was as if they picked me instead of the other way around. Stories do indeed matter. In fact, maybe stories are the best way to communicate with another person when there is something to tell. The Library Book is proof of this. I highly recommend it.