The Faithful Spy: A True Story: Dietrich Bonhoeffer and the Plot to Kill Hitler 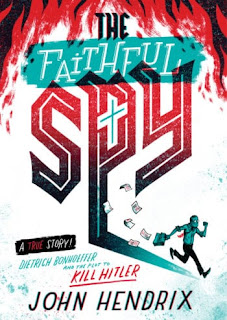 Some of you may not be aware that my father is a Methodist minister. I am not only a Christian, but one of those dreaded "preacher's kids" you've heard so much about. I tell you this as a sort of confession because I thought I knew about Dietrich Bonhoeffer because of my upbringing but I really had no idea what he did until I read this book, The Faithful Spy: A True Story: Dietrich Bonhoeffer and the Plot to Kill Hitler by John Hendrix. As I was growing up I would hear about Bonhoeffer in sentences similar to those I'd hear about Martin Luther, or John Wesley, or Calvin Knox. I just figured he was just another theologian who had insightful things to say about a life in Christ. Later I came to understand that he also was a published author and that his books were very deep and theological. I attempted to read his The Cost of Discipleship once but gave up quite quickly. I thought it was his theology that got him in trouble with the Nazis. I had no idea he was killed by them, just weeks before the end of the war, because he was a spy conspiring with others to assassinate Hitler!

So The Faithful Spy: A True Story: Dietrich Bonhoeffer and the Plot to Kill Hitler cleared up my misconceptions of the famous German theologian and it delivered the information in a remarkable way---through a graphic (illustrated) biography written and illustrated by John Hendrix. however, unlike most graphic novels, this book is quite heavy in its text to illustration quotient. The illustrations were usually to make a point about what the text said, not to replace the text. And most speech wasn't delivered in text bubbles. I say this because it was decided that this book should be judged for a potential Cybils award in the JH/SH nonfiction category, not the graphic novel category.


Posted by Anne@HeadFullofBooks at 12:03 PM