Is it a book haul or do I have too many books checked out, again?

Feast or famine (though famine is fairly rare)---I currently have way too many books checked out from the library in the print or audio format! Why do I always seem to do this to myself?

Here's the pile. Where should I start? 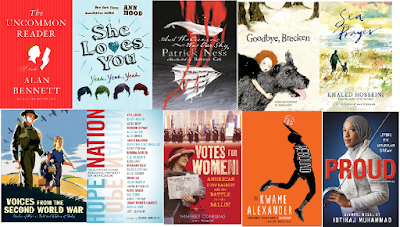 E-book:
The usual due date for my library is three weeks. Many of the books I placed on hold because they were NOT readily available when I ordered them. Those books will become my highest priority because I won't be able to renew them. I have until the end of December of Cybils books and my book club books need to be read before club meetings, which vary by groups. If I get started right this moment I should be able to make a big dent in this list before the due dates. Wish me luck!

Update October 17th: It's eleven days after I wrote this post and I am happy to report that I have actually finished eight of the fifteen books and have a good start on two others.
Completed print:
Completed audio:
Currently reading:

Posted by Anne@HeadFullofBooks at 3:32 PM