The Uncommon Reader --- And a wonderful book club meeting 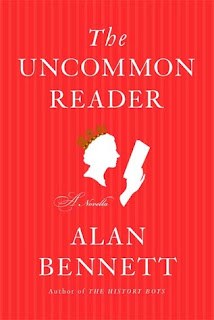 Last night our book club meet to discuss Alan Bennett's "deliciously funny novella" about reading. It begins when the Queen of England stumbles upon a book mobile and feels duty-bound to check out a book. This begins a whole new chapter in her life which revolves around reading.


With The Uncommon Reader, Bennett brings us a playful homage to the written word, imagining a world in which literature becomes a subversive bridge between power-brokers and commoners. By turns cheeky and charming, the novella features the Queen herself as its protagonist. When her yapping corgis lead her to a mobile library, Her Majesty develops a new obsession with reading. She finds herself devouring works by a tantalizing range of authors. With a young member of the palace kitchen staff guiding her choices, it’s not long before the Queen begins to develop a new perspective on the world - one that alarms her closest advisers and tempts her to make bold new decisions. Brimming with the mischievous wit ...The Uncommon Reader is a delightful celebration of books and writers, and the readers who sustain them (Goodreads).

Published in 2007, I'd read The Uncommon Readers years ago so I thought a re-read was best since I was also leading the book club discussion at my house this month. It is such a short book, 120 pages, and quite straight-forward. I worried we would run out of things to talk about long before the end of the club meeting. As I re-read the book several quotes really jumped out at me and I made note of them to include in the discussion. But how to get the other gals involved in the discussion? It hit me that I could use the quotes and create different questions from them. I did it and the book club was a success. (See the questions below.)

Our meeting was last night and I handed each participant a card with a question on it. I asked them to take a few minutes to complete their homework by looking up their quote or to prepare their response. Each question was asked in order, 1-16. Each participant was directed to answer her question first before opening it up for the group to jump in if anyone had anything to add. I summed up the discussion with ten things I had found our about Alan Bennett from my research of the author. It was not necessary for the discussion but a bit eye-opening. For example, he has been an extremely prolific writer during his career; He turned down knighthood because he didn't want to feel like a suit-and-tie sort of guy; And he was pick-pocketed of £1,500 which he admits has made him less trusting of people.

My lesson worked beautifully. Everyone talked and participated, which is rare. Everyone had something to say about their own question and quite a few of the questions generated a full discussion among the group members. By the end of the evening everyone was buzzing and to a person came up to me to talk about how much they enjoyed the book and our "lesson." Now I am not saying that your book club will have as much success as ours did, but it is worth a try. I am often given a lot of latitude in club because I am a retired teacher. When it is my turn to lead the book discussions, usually about once a year, people expect me to do something sort of "schoolish". But I honestly think this would work for other clubs, even if you aren't a teacher.

Here are the question cards and a link to the page where I found the ten facts about Alan Bennett. Hopefully you can just cut and paste the questions and print them out for your use. I hope you have fun!