Lily and the Octopus---a review and a comparison 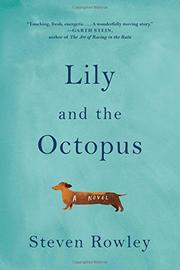 Lily and the Octopus is a love story between a man and his dog. Ted is a lonely writer. Lily is his aged dachshund. Lily, is 12.5 years old and is nearing the end of her life. Ted is completely unprepared to let her go. As any pet owner knows, we usually outlive our pets but that doesn't make their passing any less painful and heart-wrenching.

So from the outset the reader knows this book is going to pull at one's heart-strings, except for one little detail---the octopus. It is the octopus that causes this book to veer off into unexpected places.

Ted, who recently ended a long-term relationship with Jeffrey, lavishes his love and attention on his dog. They even spend special nights together. Thursday is the night they talk about cute boys; Fridays is pizza night; another night is Monopoly night. It is on a Thursday night when Ted first notices the octopus attached firmly onto Lily's head. For the rest of the novel Ted cannot bring himself to name the actual thing on Lily's head and he calls it an octopus, an evil sea-creature who is taking over his beloved pet. His best friend, Trevor, and his therapist, to placate Ted, call it an octopus, too, so his delusions are confirmed as reality.

Ted and Lily carry on conversations, when other people aren't around, of course. The octopus talks, too. But Lily's voice is very unique and rather barking-like. After licking tears off Ted's face she says.
“THIS! EYE! RAIN! YOU! MAKE! IS! FANTASTIC! I! LOVE! THE! SALTY! TASTE! YOU! SHOULD! MAKE! THIS! EVERY! DAY!”

The book becomes a bit silly and tedious as Ted steadfastly insists that the octopus is real and he attempts to scare it, so it will leave Lily alone. In fact, at one point in the story the plot becomes almost magical realism when he and Lily go on an adventure to hunt the octopus on an improbable sea journey. But with all good magical realism the plot allows the reader to finally decide, once and for all, that the details stand for something else. In this case, Ted may temporarily be mentally ill due to his grief and his loneliness. Maybe you've been there once or twice. I know I have.

This book may be silly, often farcical, but it also perfectly captures the exquisite love we have for our dogs.

As I read Lily and the Octopus I couldn't help making comparisons with my dog, Muffy. The two dogs have a lot in common. Both dogs are twelve. Both are long bodied, short-legged. Lily is a Dachshund, Muffy is a Welsh Corgi. Lily and Muffy both had to have an operation for a ruptured disk in their spine. We both paid exorbitant amounts of money for the surgeries. Muffy was treated at an emergency clinic based on a referral from our veterinarian. We had a hard time finding the clinic as it was in an unfamiliar part of town. Ted also had a hard time finding the clinic with Lily. Lily has a red ball that she loves to distraction. Muffy is the same way about our laser pointer. There is no talking to her when she is under the spell of the pointer. Both dogs are big pigs and love a variety of human foods. Ha! Lily has a tumor that Ted calls an octopus. Muffy has a tumor which we call a tumor. In fact, we just talked last night about when/if we should bother having it cut off again. The vet told us it would return and will return again even if we have it cut off. At what point do we say enough is enough? Ted got to that point. I'm afraid we'll be there soon.

I want to warn you. If you love your dog, you will cry when you read Lily and the Octopus. But don't avoid it for that reason. It will break your heart but will also stitch back together again. It is worth the pain. Believe me.

Posted by Anne@HeadFullofBooks at 3:08 PM