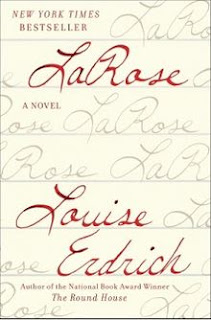 The central question in LaRose by Louise Erdrich is: Can a person "do the worst thing possible and still be loved"?

Landreaux Iron does the worst thing. When he is out hunting one day, he accidentally hits and kills the young son, Dusty, of his best friend. Set in North Dakota on the Ojibwe Indian Reservation, Landreaux and his wife seek tribal remedies in a sweat lodge and by talking to their priest about ways to deal with their guilt. Ultimately they decide to give their son, LaRose, to Dusty's family following an ancient tradition as a way of seeking pardon. Dusty's parents, Nola and Peter Ravich, are obviously tentative in accepting another child as "payment" for their lost son but eventually find that LaRose does indeed fulfill a deep need for solace in their hearts.

LaRose, who is named for a long line of ancestors with the same name, is really a remarkable kid who seems to have an intuition what he needs to do to help both families heal from this horrible situation. He seems to be able to draw upon the strength and lessons learned from his previous namesakes, whom we meet in short, retrospective chapters.

In the hands of most authors LaRose would be a completely sentimental, sad book, but not in the very adept hands of Louise Erdrich. She understands how to tell a story which compels the reader to confront the situation at hand without being sappy. Along the way we even gain insights and knowledge about Native American culture and family structure.


Perhaps the most important of Erdrich’s achievements is her mastery of complex forms. Her novels are multivocal, and she uses this multiplicity to build a nest, capacious, sturdy and resplendent, for her tales of Indians, living and dead, of the burden and power of their heritage, the challenge and comedy of the present’s harsh demands. Woven into the specificity of these narratives is Erdrich’s determination to speak of the most pressing human questions. ---Mary Gordon, NYT Book Review

Running concurrent to the story involving LaRose and his two families is the story of Romeo, a community n'er-do-well. He is always digging up dirt on everyone which he saves up to use at a later date. He is especially interested in digging up something incriminatory on Landreaux since he blames all/most of his current woes on him for an accident that occurred when Landreaux and Romeo were boys. Romeo provides the story with much needed comedy relief. He also is complex and interesting. Even though he is a despicable character, the reader will enjoy the time spent with him and his narrative.

Food plays a rather large role in the story. People tend to get together when there is food, giving the characters a chance to converse. My favorite, where the full force and power of community and culture were on display, happened around the graduation party and potluck for Hollis, one of the children raised in the Iron family. Blessings over the food and an elaborate drumming ceremony over the cake bring to the forefront the importance of traditions and culture in family gatherings. I was so touched by this scene I found myself crying when I tried to explain it to my husband. In light of the recent attacks on Muslims and Mexicans it seems that our government forgets the importance of culture and traditions on who we are as a people. We are all "less than" if we don't allow everyone a chance to express and rejoice in these celebrations of culture or religion.

Another book by Louise Erdrich, Roundhouse, is one of my favorite books. It is set on the same Ojibwe reservation in North Dakota and deals with the theme of revenge. LaRose deals more with the theme of forgiveness. Through forgiveness we find there is an answer to the initial question. Yes, one can still be loved, even if the worst possible thing happens.

Anne
Posted by Anne@HeadFullofBooks at 10:59 AM