The Reader by Traci Chee 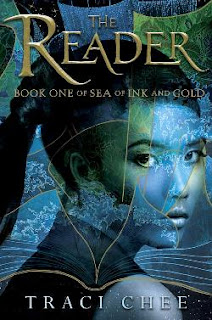 What do I love about The Reader by Traci Chee? Let's see.
Hmm.
Could it be because it is about the magic of books and reading?
And...
There are a stories within the story where really magical stuff happens and then it really happens in real life?
And...
The stories are about really fun things like swashbuckling pirates, and journeys to the end of the world?
Or if one prefers...
There are assassins, and fighting rings, and super kick-ass librarians.
But wait, I get ahead of myself.

Traci Chee's debut novel is all those things I mentioned and more (and it is only the first book in a series.) I can hardy contain my glee at the thought of more adventures to come with Sefia and her mute friend, Captain Reed, and others.

Sefia's mother dies when she is very young so she and her father have a very strong bond and he is very protective of her. He trains her very carefully what to do if anyone comes looking for them. When she arrives home one day to find her father murdered, Sefia follows the plan they have practiced many times and is able to escape with Aunt Nin with just one reminder from home, a strange box which contains a large, pages item which she later learns is a book. No one in her land, Kelanna, reads except the elite few, and there are no books to be found anywhere. Sefia and Aunt Nin survive in the wilds for many years until one day assassins tracking the book kidnap Nin. Sefia is alone but determined to rescue her aunt. Along the way she teaches herself to read and saves a boy, who is rendered mute by the horrific circumstances of his life. With the help of her new friend Sefia continues the search for her aunt not knowing that she is also being hunted.

Sounds wild, doesn't it? If Sefia's story isn't exciting enough by itself, she spends the evenings reading out the stories in the book, and by the act of reading them out, makes them come true. Reading The Reader is a multilayered experience both a bit confusing and exciting in turn, "but the author avoids leading readers along too transparently, trusting them to puzzle together the pieces surrounding the mystery of Sefia's past. An exploration of self-determination and the magic of the written word, Sefia's story is an absorbing introduction to the Sea of Ink and Gold series" (Publisher's Weekly).

I don't know what else to tell you, except to ask, what are you waiting for? Get to it. Find a copy of this book and let yourself just fall into the middle of a wonderful book. And, by the way, pay close attention to the printed word. There is a mysterious code just waiting for you to find it.

And yes, this is one of our Mock Printz books. Sure hope it gets a nod this year come award season.

The Reader by Traci Chee
G.P. Putnam's Sons, c. 2016
Print edition checked out from my library.