Lucy and Linh by Alice Pung 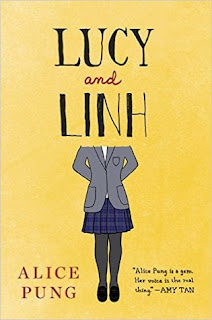 When Lucy Lam, a Chinese Australian teen, wins a prestigious scholarship to Laurinda Ladies College, no one is more surprised than Lucy herself. As refugees from Vietnam, Lucy and her family settled in a lower/middle income suburb of Melbourne named Stanley and Lucy has attended the local Catholic school where is popular and active. When the offer for the Equal Access scholarship was awarded, Lucy's family rejoiced, seeing it as an opportunity for all of them to move up economically. What Lucy didn't anticipate was the isolation she would feel at Laurinda since so many of the girls had attended the same school since kindergarten and their families had so much money. She also didn't anticipate how she would be surrounded by such mean girls. Known at the school as The Cabinet, these girls not only bullied and belittled other students but also treated teachers with disdain and pulled pranks which were not funny. To keep herself somewhat grounded in her seemingly double life, Lucy writes letters to Linh, her best friend from Stanley. Linh represents all the qualities Lucy sees slipping away within herself. Linh is audacious and speaks up for herself whereas Lucy sees herself becoming more introverted unable to speak up against the injustices she sees and encounters in her new school. At the same time she starts to look critically at her home life, where both parents work very hard in menial jobs but have not fully integrated into Australian society. Near the end of the book there is a plot twist which provides a spotlight on Lucy's life as she tries to square all the parts that make up herself.

Though I am not Australian or Asian, I could relate to the messages in Lucy and Linh by Alice Pung. In fact, I think the book holds universal truths: we are, to some degree, bound by cultural expectations with which we have to grapple and make peace; schools can be very unsafe places for some students with adults often being the unwitting perpetrators of bullying behaviors; only when we come to embrace our whole self can we move forward in confidence. I don't think these truths belong only to Australians or Americans. As I read the book I recognized the brilliance of the message, one all teens should hear.

Here is what other reviewers have said about the book:


"Lyrical, enchanting prose from a narrator with perception so acute she cannot help but share it immerses readers into the very heart of every scene. This is highly recommended for classrooms and libraries [and] a superb choice for book discussion groups and world young adult literature survey courses."--VOYA, Starred review

"Part Mean Girls, part Lord of the Flies, and part Special Topics in Calamity Physics, this well-observed and unsentimental novel taps into what is primal within privileged adolescent girls."--The Bulletin, Starred review

"Lucy's narration pulls readers alongside her uncertain navigation of two worlds, and we can't help but cheer in solidarity as Lucy recognizes assimilation masquerading as inclusion, refuses to back down, and instead embraces who she is."--Horn Book Magazine


Needless to say I highly recommend this book and have recommended its inclusion in the BSD Mock Printz list, a late entrants but so be it!

Posted by Anne@HeadFullofBooks at 1:08 PM