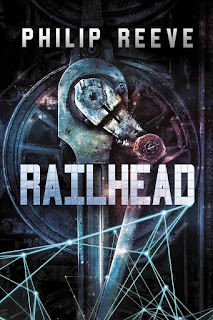 Zen Starling is a small-time thief. After he steals a necklace from a shop, he is chased but he is able to hop upon train to avoid capture, just as it is disappearing into a K-gate, en route to another planet. Once he is on the train he is sure he wasn't followed so he lets down his guard. When he departs the train at his destination he is amazed to see the Motorik android he thought he had eluded waiting for him. To his surprise he learns she is not interested in the necklace but wants to offer him a job, a big job, to steal an object from the Emperor's train. Zen decides to take the job but when the heist goes awry, everything Zen knows about the world is spun out of control. Now he must steal the item back or perhaps the universe, as they know it, will come to an end.

Philip Reeve is a master story-teller and world-builder and Railhead is a perfect example of his oeuvre. As the reviewer at Kirkus Reviews says,


Reeve's writing never flags, with moments of pathos and magic seamlessly interwoven. Dozens of characters collide--the sentient trains; the Motorik; the Emperor's daughter Threnody and her boring but stalwart betrothed; Hive Monks; the Railforce agent who has tracked Raven across lifetimes--each one nearly as fascinating as the world Reeve has created (don't miss the glossary at the end). As he did with the Mortal Engines series, Reeve has crafted something at once weirdly familiar and marvelously original. Thank the stars there's at least one sequel planned already.

I just gobbled up this Sci-Fi adventure. Folks who know my reading habits don't think of me as a Sci-Fi reader, and I'm not, partially because I usually have a hard time imagining the world in the tale. Reeve develops a wide assortments of worlds and I enjoy inhabiting them while I read about Zen Starling's adventure. This is the only book on the 2017 Mock Printz list which we put on the list without reading it first, based on recommendations, reviews, and the author's reputation. I know it will garner a big following among my teen readers.

Posted by Anne@HeadFullofBooks at 1:01 PM