Poems from the Book of Hours by Rainier Maria Rilke 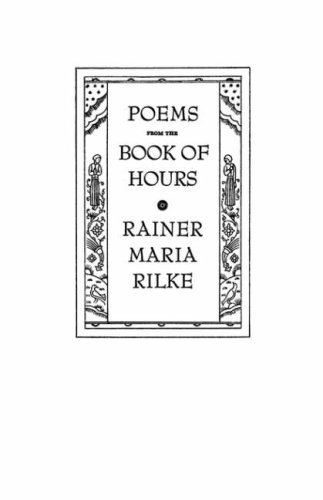 I am feeling a little ripped-off right now. I just finished reading the tiny volume, Poems from the Book of Hours by Rainier Maria Rilke. The book is published by New Directions and translated by Babette Deutsch. It is a mere 51 pages long with poems appearing in the original German on one side of the page and the English translation on the other.

Two thoughts entered my head as I read through the collection. 1) I had no idea that Rilke held such different religious views from the mainstream and 2) I wondered why everyone is so crazy for this poet. I found most of the poems to be uninspiring and, frankly, confusing. My overall reading experience was "meh."

Then I visited Goodreads to read the reviews and I couldn't believe what I discovered. Everyone was gushing about the poems, the poet, and the translator. A few of the reviewers said they had originally read the book from a library book but had to purchase their own copy to keep. Several other people quoted lines from their favorite poems. This caused me to turn back to the book to look for those particular poems wondering if I had been half asleep when I read them since I remembered none of them. After a thorough investigation I discovered the favorite poems listed by other readers were not included in my volume. So the publisher, New Direction, included all the uninspiring poems and left out all the good ones? What a bummer.

The very first reviewer on Goodreads says her favorite poem, "I am praying again, Awesome One"
(Ich bete wieder, du Elauchter) is in the book. Nope, it is not. I've looked three times. Too bad, because I really like the sounds of the opening stanza:

You hear me again, as words
from the depths of me


rush toward you in the wind.

So maybe this one reviewer got confused. I continued to check for more mentioned poems.  The very next poem mentioned by a reviewer, "Widening Circles" is not in this volume, either. Another pity. This one (I found it online) is short but good but not in my volume unfortunately.


I live my life in widening circles


that reach out across the world.
I may not complete this last one
but I give myself to it.

A third reviewer mentions another poem which I dearly want to read because it sounds fantastic. But, alas, it is not in this book, either. She quoted this stanza from a poem she didn't name:

We become so accustomed to you,
we no longer look up


when your shadow falls over the book we are reading
and makes it glow. For all things
sing you: at times
we just hear them more clearly.

OK, I did find one reviewer who mentioned a poem which is actually in this volume. But by now I am so disgusted with this book I hardly notice.

Posted by Anne@HeadFullofBooks at 8:46 AM