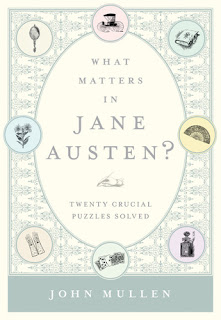 What Matters Most in Jane Austen? Twenty Crucial Puzzles Solved.
by John Mullan

Let me summarize the last five essays then I will review the whole book. Feel free to go back and read the weekly updates made prior to this post to get a fuller picture of the book and the questions that Professor Mullan is attempting to answer about the writing of Jane Austen.

16. Are Ill People Really to Blame for Their Illnesses? The early 1800s was a frightening time to become ill. Apothecaries and surgeons were battling it out as to whose methods were best. There were no antibiotics. Mercury and lead were not known poisons. The medical practice of bloodletting was common. Little was known about germs. Colds were thought to be caught from being out in the rain and getting wet. Frightening. Is it any wonder that so many of Austen's characters were hypochondriacs? The biggest of these hypochondriacs is Mr, Woodhouse who calls himself a 'sad invalid', and Mary Musgrove who foresees 'that she should not have a day's health all autumn.' Women were expected or at least accepted for histrionics. Mrs. Bennet completely falls apart when she learns about Lydia and Wickham; Marianne won't eat or even speak after Willoughby leaves AND this was before she knew for sure the relationship was over. Only in Persuasion do we see real illnesses and infirmities: crippling diseases or wounds. No doubt illness played a big role in the lives of people living in Austen's day, so it is not surprising she included it in her stories.

17. What Makes Characters Blush? Here is a topic on which I have never thought about before. Blushing. "Austen requires her reader to be an interpreter of blushes." She also often using blushing to confuse characters. For example, Fanny blushes at something Mary Crawford says. Mary thinks she is blushing because she is happy or shy, really Fanny is angry or upset. Here are some of the wonderful blushing moments from her books: 'She blushed, and Jane blushed; but the cheeks of the two who caused the confusion, suffered no variation in color.' (Jane and Elizabeth blush, those who should be blushing, Wickham and Lydia, don't in P and P.) 'Elizabeth blushed and blushed again with shame and vexation.' (Mrs. Bennet is "so embarrassing because she is immune to embarrassment" in P and P.) Fanny has 'soft skin...so frequently tinged with blush.' (Henry Crawford notices Fanny Price because of her blushes in MP.) 'Their eyes instantly met, and the cheeks of both overspread with the deepest blush.' (Darcy and Elizabeth happen upon each other at Pemberley in P and P.) When Lady Russell hints to Anne (Persuasion) at a 'possible attachment' and a 'desirableness of the alliance' with her cousin, Mr. Elliot, Anne 'only smiled, blushed, and gently shook her head.' So many blushes, so few books full of them. I am going to start paying attention to modern literature.  Do our characters still blush?

18. What Are the Right and Wrong Ways to Propose Love?  I guess we can all agree that proposing by letter is not a good idea. Poor Robert Martin in Emma learned that the hard way. Had he asked Henrietta in person I'm sure she would have said yes and the whole book would have fallen apart at that point. Unbelievably marriage proposals by letter were not uncommon in Austen's day, Apparently there were even letter-writing manuals which provided templates for doing so. Wouldn't that be a shock to discover that your beloved ask you for your hand in marriage by using a template? Lengthy courtships were not the fad, either.  Charlotte Lucas tells Elizabeth her sister Jane 'should...make the most of every half-hour in which she can command his [Bingley's] attention. When she is secure of him, there will be more leisure for falling in love as much as she chooses.' Secure him first, love second. "In Austen, a man's declaration of love is (or should be) the same as a marriage proposal." Elinor thought Marianne and Willoughby were engaged because she was sure they had declared their love. It took us a book to learn that such words had never been spoken aloud.

19. When does Jane Austen Speak Directly to the Reader? I have always been shocked when Austen does this. I am reading along and suddenly Austen inserts herself into the story. What I didn't realize is that other writers of the day did this with some frequency. Usually she inserts herself near the end of the tale as in the ending of Pride and Prejudice where we learn of the happiness of Mrs. Bennet at marrying off three of her daughters when Austen breaks in, 'I wish I could say, for the sake of her family, that the accomplishment of her earnest desire of the establishment of so many of her children, produced so happy an effect as to make her a sensible, amiable, well-informed woman for the rest of her life.' Regrettably she remains a silly woman, "even Austen cannot change her." I love that idea that Austen created her but cannot control her. Ha! The author enters Mansfield Park "nudging us into accepting what the novel was not going to show." In Persuasion Austen again speaks in first person to the reader "in order to signal a withdrawal from the lives she invented." In Northanger Abbey the author is present throughout. This may account for why this book feels so different than her other novels "we are constantly reminded of the author's presence, arranging and commenting and speaking as herself." And in the last chapter sign-off she tells the readers she is aware she has compressed some of the details. Do we like Austen so much because we feel her presence with us while we are reading her books? Just a thought.

20. How Experimental a Novelist Is Jane Austen? "Jane Austen knew her novels were different...it can be seen in her book/booklet 'Plan of a Novel [1816].' Austen did not create perfect heroines, for one thing. "Austen's interest in her heroine;s faults and errors was in itself something extraordinary in fiction."Some critics believe that Austen was the first extensive practitioners of what is called the free indirect style." In this style both thoughts and actions are integrated into the narrative. Through Austen's mastery of this style we not only know how a character behaves but how these actions are affecting him internally. "Any novelist can tell us what a character feels; Austen developed a means of declining to tell us." I'm not sure I completely understand this writing technique (obviously) but suffice it to say that it is one of things that sets Austen apart from other authors.

For an Austen-geek like myself this book was a treasure trove of information and insights. I doubt someone who has not read all or most of Austen's novels would find it very engaging. Characters and plots are not introduced assuming that anyone who would pick up this book wouldn't need such introductions. In a few places I got lost, especially the last were her experimental style of writing was extolled. Oh well, I guess I just need to read and study more. I was fascinated by the insights Mullan provided about topics like marriage proposals, blushing, the games they played, and what they call each other. I shall think of these things every time I reread one of Austen's books. And speaking of rereading, I now have an insatiable urge to do just that. I have decided to reread Sanditon, this time with some help of the Internet to determine which bit Austen wrote verses the bits written by 'a lady.'

I'm assuming if you have read all the way to the bottom of this post you too are an Austen fan. For you, I do recommend this well-written and well-documented book.

Posted by Anne@HeadFullofBooks at 5:37 PM