X: a novel by Ilyasah Shabazz and Kekla Magoon 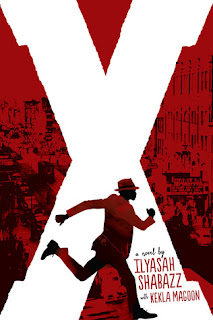 This is embarrassing to admit. Before I read X: a novel I knew very little about Malcolm X. This revelation got me thinking about how little I know about other civil rights leaders, including Martin Luther King, Jr. In the case of Malcolm X I knew he lived for a time in Harlem and in Boston. I knew he had spent some time in prison and he was Muslim. That was about the sum total of what I knew about this famous American who helped champion for the rights of African-Americans in a very turbulent time in our history, the 1950s and 60s.

Thankfully I know more now that I've read X: a novel. This novelization of Malcolm X's early and formative years was written by his daughter, Ilyasah Shabazz, and Kekla Magoon. It was decided to write in the fiction format for the sake of cohesion and to add a few artistic liberties. I always tell students who ask me how a book can be fiction if the person really lived that the fiction aspect can be the parts of the story that can't be proved, liked actual conversations between two people. Without those details the story just becomes a dry encyclopedia-type accounting of the person's life.

X: a novel opens in Lansing, Michigan where Malcolm and his family grew up. His father had already been murdered and his mother was trying vainly to keep the family fed and together. At some point everything fell apart. Malcolm was sent to live in a foster home, the mother was sent to an insane asylum, and the rest of his siblings lived with other family members. Eventually Malcolm went to Boston to live with a half-sister. It was in Boston where he learned the ways of the street and started down his path toward prison. Along this circuitous path to prison he saw a lynched man hanging in a tree, heard Billie holiday sing "Strange Fruit", a song about lynching, and was nearly beaten to death for being black. All the while, even in his most dark days of debauchery, the teachings of his parents kept rattling around his is head. The mantra instilled in him from birth would chant, "Up, up you mighty race, accomplish what you will." (Marcus Garvey quote.)

Finally in prison for robbery, Malcolm Little could be still long enough to allow those life lessons and voices to filter into his soul. He convert to Islam, started reading, and started formulating a plan for righting the wrongs of the oppressed in the country. That is where this novel ends. The reader is left to reflect on his life up to this point and must take it upon themselves to research what he did after getting out of prison before his assassination in 1965.

I listened to the audiobook version of X: a novel. Unfortunately, I think this book would have worked better for me in the print version. Listening to hour upon hour of "Malcolm took this drug", and "Malcolm did this illegal thing", or "Malcolm was high when he did this" got a bit tedious. I suspect if I had been reading the print edition my eyes would have flown over those bits to linger on the parts where he was more reflective on his life and his motivations. At the end of the book is a time line of Malcolm's life and his family tree. It also contains an author's note by Malcolm's daughter, Ilyasah Shabazz and historical information relevant to the story. As I listened to this information on the very last disc it was clear if I'd hand a book in hand I could have looked at these anytime during the story when I was confused about the timing of events or of family members names and ages. Usually audiobooks are my favorite way to consume a book, but not this time.

Reviewers love this book. It has earned at least six starred reviews which is just about the best it can do. This is an important book in American history and should be widely read. I recommend that readers select the print edition, however. If you select it in an e-book, be aware of the information at the back of the book, go there and bookmark those pages for easy access as you read.

Please join me in celebrating the blogoversary of Head Full of Books by signing up for aan audiobook giveaway of Egg and Spoon, the 2015 Audie Award Winning book. Click the link to the sign up page.  Blogoversary Giveaway click here.

Posted by Anne@HeadFullofBooks at 8:52 AM