We All Looked Up by 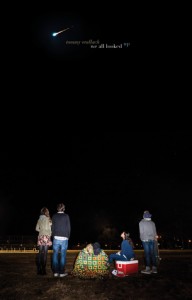 Imagine if you wake up one morning and notice a big asteroid in the sky. You wonder if it is anything but beautiful. Later you learn that scientists believe there is a 67% chance the asteroid will hit Earth and end life as we know it. What would you do? Would you keep going to work or school? Would you continue your cancer treatments or stay on your diet? Would you apply to the college of your dreams or try drugs for the first time?

These are the types of things that Eliza (the school slut), Anita (the goody-two-shoes), Andy (a stoner), and Peter (school jock) have to face in We All Looked Up by Tommy Wallach. . They seem to form a "karass", a group of people somehow oddly linked together. Before the asteroid made its appearance the four barely knew each other and now, well, let's just say their lives become all tangled up together.

The story is set in Seattle, though a hardly recognizable one since almost the whole area is crippled as the infrastructure of the city starts falling apart as people stop going to work, including firefighters and doctors. The four decide to host an end-of-the-world party but plans are difficult to make and to carry out in these extraordinary circumstances.  Romances spring up and die. Crime is rampant. None of the old rules apply.

A few years ago a movie starring Steve Carell and Kiera Knightley called Seeking a Friend For the End of the World came out. The premise was very similar. A huge asteroid was heading to earth and people stopped behaving like a civilized society and chaos reigned. Both the movie and the this book make you stop and think, "if the end of the world was imminent how would I behave?" I like to think that I would remain a good person, law-abiding, helpful, and kind. But who knows. Each man is out for himself after all.

Parts of the book were so good, and so heart-wrenching I really felt for these teen trying to make something of their lives. But other parts of the book just seemed so far-out, odd, and unbelievable, I really couldn't embrace the book fully. I just had a funny thought, though, as I sat here typing this blog post. Who would have thought that things would have worked out the way they did in New Orleans after Hurricane Katrina? With people being arrested and detained without legal representation for days, months? So maybe the things that happen to our karass of teens in We All Looked Up isn't so far-fetched as I initially thought.

The book is really quite entertaining and I think today's teens will find a lot to like in it.