Today's Weather: Rain, rain, and more rain. Reports of flooding on certain rivers in the area.

New Year's Day: Don and I opened our new year in Pasadena, California for the Rose Parade and Rose Bowl. We had SO MUCH FUN. Leading up to New Year's Day we spent prowling around art museums in the area.  See my Snapshot Saturday post for photos of our museum visits. On New Year's Day we bundled up for the parade which started at 8 AM PST. We bundled up because the temperature was hovering around zero, a Rose Parade record. We had seats in the bleachers. Last time, twenty years ago, we tried to see the parade without tickets in the bleachers and we just couldn't see a thing. This time we paid the money for seats and it was well worth it. We sat with a congenial bunch of folks who were all willing to cuddle since we were all so cold. Ha!


Rose Bowl Game: Later in the day we walked up to the Rose Bowl Stadium from our motel (around two miles) and took our seats in the University of Oregon section with other Duck fans. Again we made fast friends because we all were cheering for the same side. The game ended up being a blowout for the Ducks as they beat the Florida State Seminoles 59 to 20. By the time we walked back after the game I was pretty tired. But what a fun day. 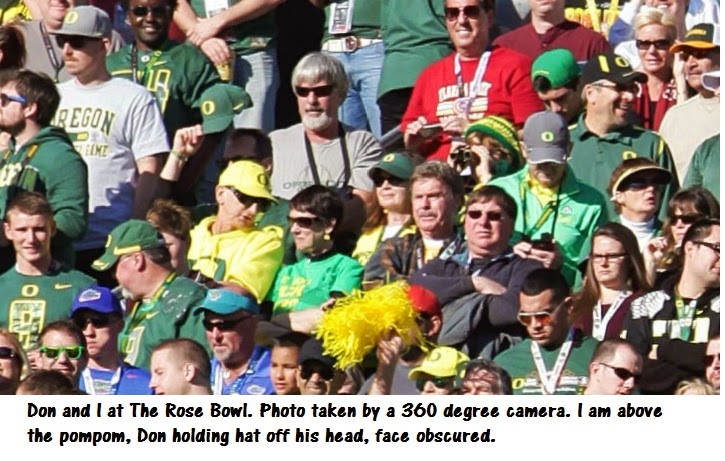 Weird weather: since it was so cold in Southern California our flight home was delayed for two hours because there was frost on the wings and the airport didn't have any de-icing stuff.  They actually moved the plane into the sun and hoped it would melt the ice that way. Fortunately for us we were in no big hurry to get home since Carly wasn't picking us up at Sea-Tac until after noon.

Reading funk: for some reason or another I hardly cracked a book during the whole winter holiday. I checked out six books from my library and only finished one of these books. It is time for a book to help get me out of my funk. Any suggestions?

From the kitchen: Our neighbor gave us a HoneyBaked Ham for Christmas and we are still nibbling on the ends of it over a week later. Last night Carly and I put together a big pot of split pea soup with the scraps from the ham. Just the right thing on a cold, rainy day.

Back to school: My husband "made" me go to bed early last night as today was back to work after two weeks off. I am like a teenager: given the chance I will stay up late and get up late so adjusting back to rising early is always hard for me. But tonight I should have no problem going to bed early.

Currently reading:
Recently finished reading:
No reading resolutions this year: except I hope to read 100 or more books. I joined so many challenges this past year and then flaked out on most of them. This time around I am only reading what I want to read, or book club selections. We'll see how long this resolution starts before I sign up for some challenge or another. What about you? Are you participating in any reading challenges for 2015?

Word of the week, maybe year: barukh, which is a jewish word meaning blessed! "Barukh is a homonym expressing a reciprocal relationship: man can address God as barukh by expressing feelings of thanksgiving, reverence, love, and praise, while he is barukh by God who bestows His material and spiritual gifts." (Jewish Virtual Library). I really like the thought of my relationship with God being two-way. God is barukh and He, in turn, causes me to be barukh.

Music of the week: somehow it seems appropriate since the title is Remember When it Rained. (Um, the answer is yes. It is raining right now. Ha!)

Posted by Anne@HeadFullofBooks at 5:25 PM