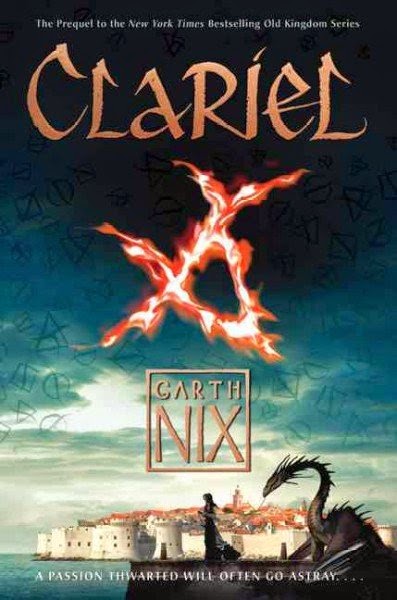 Walk around with characters from books in your head long enough and what happens? You never want the story to end because it is like saying goodbye to good friends. This is what happened to me when I read Clariel by Garth Nix. I just wanted the story and the characters to go on and on. I also wanted to live inside that story. For days after I finished listening to the audiobook, I pined for my "friends" in Clariel and wondered and worried about what happens next.

Clariel is the fourth book in The Old Kingdom series by Garth Nix (sometimes called the Abhorsen Triology) which started with Sabriel, then Lirael, and lastly The Abhorsen. Now Clariel, a prequel to these stories, is published eleven years after The Abhorsen. Talk about a long wait!

Here are two YouTube videos that give you an idea about the book and series, but I warn you the second one has SPOILERS, so don't watch it if you don't want the big ending revealed. What I love about the second video is that Garth Nix talks about his series and it is insightful. Hey, I have an idea.  Run out and read the book, then come on back to this blog and watch the second video with the SPOILERS, because then they won't be SPOILERS to you.

WARNING!!!!! SPOILERS revealed in this video:


I feel completely ill equipped to do an offical review of this wonderful book or series other than to say, WHAT ARE YOU WAITING FOR? READ IT!

I've read a lot of YA books this year, some wonderful and some completely meh.  It is shocking to me that this book isn't getting more LOVE from those you think they know what they are talking about when it comes to potential award books. Garth Nix is a fabulous, FABULOUS writer...and he writes out his chapters long-hand if he gets stuck in the process. The world-building he has done for the series is beyond magical and inventive.  I can picture every step each character takes as they walk through the story.

Garth Nix is Australian which happens to be a BIG GIGANTIC coincidence since I am highlighting Australian authors this week and I am hosting an Australian teacher in my home right now.  Not sure if it is the sunshine, the Southern Hemisphere, or rubbing elbows with kangaroos, but there sure are a lot of very talented authors harkening from Australia. I recommend that you check out a book by Garth Nix (or Marcus Zusak, or Melina Marchetta, or Jacqueline Moriarty, or...)

Nix says that he is currently working on another book from The Old Kingdom. Argh! Another wait. Perhaps I'll just start again at the beginning in anticipation.

For what it's worth, this book gets my vote for serious PRINTZ consideration. Printz committee members are you paying attention?

Posted by Anne@HeadFullofBooks at 3:31 PM