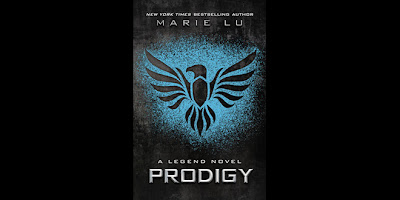 Prodigy, the middle book in the Legend Trilogy by Marie Lu, breaks with the middle book syndrome I've spoken about before where the bad guys gain ground and all seems doomed for the good guys.  If anything, it is very difficult to nail down who actually are the good/bad guys, and the good/bad governments.

With plot twists aplenty and nearly non-stop action it is easy to understand why this series is so popular with teens. I understand that it has already been slated for a movie, even though we haven't even seen the third book yet.

The action in this book opens in Las Vegas where Day and June join up with the Patriots after narrowly escaping the Republic in the first book. Each are given a task to fulfill to demonstrate their loyalty to the Patriots. As they separate to accomplish these tasks, each starts to realize that things aren't what they thought originally. But how do they communicate their concerns to other? What side is the right side? What should they do to avert an outright revolution?

For some reason that I can't even grasp, this book took me forever to read. I received an ARC of it at the ALA conference in January and thought I'd easily have it finished before the book came out a few weeks later.  That didn't happen. I finished it eight weeks later as a sat on a boat heading toward Victoria, BC. With nothing else to read and no other tasks needed doing I finally sat and just read it. I don't recommend reading a book, especially an action packed book like this one, so slowly. It detracted from the plot and kept me from being completely immersed in the story or tangled up with the characters.

Marie Lu is the Art Director for a video game company decided to write this series after watching Les Miserable. She wondered how the relationship between a notorious criminal and prodigious detective might translate into a more modern or futuristic story.

And now I, and half the world, have to wait for the third installment of the Legend Trilogy.

Posted by Anne@HeadFullofBooks at 9:32 AM