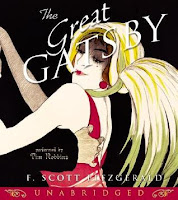 In high school I, like almost all American teenagers, was assigned to read The Great Gatsby by F. Scott Fitzgerald. Up until today I thought I actually read the book back then, but now I am not sure. I remember vaguely the descriptions of jazz parties and a observant narrator (Nick) but I got the rest of the details wrong. So maybe I just read a few chapters and pretended for the rest. What a great shame because The Great Gatsby, originally published in 1925, is not only a superb book it also provides an amazing peek at a bygone era written by the author whose works actually heralded in the Jazz Age. Lillian Gish said of Scott and his wife, Zelda, "They didn't make the 20's, they were the 20's." If for no other reason than to get a bit of a feel for life in the twenties, this book is a must-read.

So with this Retrospective Wednesday post I hope to encourage those of you who feigned your way through your first Gatsby experience like I did, barely reading it, or those of you who read it so long ago that it is now just a vague memory, to reread it. And for those of you who haven't read it yet, now's the time! Get to it! The movie starring Leonardo DiCaprio as Gatsby is coming to a movie theater near you soon. Read the story first because, as we all know, the book is always better than the movie.

Now I will leave you with a quote from a letter written to Fitzgerald by Maxwell Perkins, his editor at Scribners, after he'd had a chance to read Gatsby:


"I think you have every kind of right to be proud of this book. It is an extraordinary book, suggestive of all sorts of thoughts and moods. You adopted exactly the right method of telling it, that of employing a narrator who is more of a spectator than an actor...The amount of meaning you get into a sentence, the dimensions and intensity of the impression you make a paragraph carry, are most extraordinary. The manuscript is full of phrases which make a scene blaze to life...it carries the mind through a series of experiences that one would think would require a book three times its length." - from the postscript in my version of the book

Do yourself a favor read/reread The Great Gatsby soon! Or, as I did, pick up the audiobook and listen to the excellent voice actor Tim Robbins read it to you. The last disc of the set included a selection of letters written by Fitzgerald  to his editor, Maxwell Perkins, his agent, Harold Ober, and other friends and associates. This section was read by a different reader which gave it the feeling that Fitzgerald himself was reading us his letters. My only criticism of this recording was when Tim Robbins would drop his voice when Gatsby was making an aside and since I listen while I'm driving, road noise made it hard to hear during those parts. Otherwise, I really enjoyed the story in this format.

The audiobook was published in 2002 by Caedmon.

Posted by Anne@HeadFullofBooks at 9:17 PM