Review: Days of Blood and Starlight by Laini Taylor 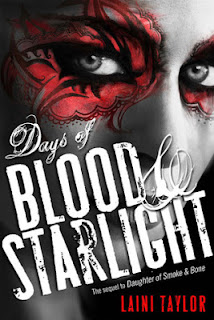 Once upon a time, an angel and a devil fell in love and dared to imagine a world free
of bloodshed and war. This is not that world.

Days of Blood and Starlight is the sequel to Daughter of Smoke and Bones by Laini Taylor where we are introduced to two lovers: Karou, an art student, and Akiva, an angel. In Days of Blood and Starlight we find Karou with her kind, chimaera,  who have attributes of both animals and humans. In fact she is carrying on the work of Brimstone and acting as the resurrectionist for the chimaera, bringing back fallen chimaera to life. While Karou is fighting for her side, Akiva is fighting a different sort of battle, one for redemption and for hope. You see, Karou blames him for the near destruction of her people and doesn't want anything to do with him anymore.

Told in alternating chapters we see Karou and Akiva both fighting mightily to change their worlds. Angels are good and chimaera are bad. I mean, chimaera are good and angels are bad. It is really obvious that there are both good and bad members of angels and chimaera and it isn't always abundantly clear which is which. And then, just when we think that the story could have a happy ending, we find out that the world is bracing for a catastrophe of epic proportions and we are left dangling with a to be continued....

Agh......that is me screaming.  I want to know how the story ends. NOW. But the third book in the trilogy won't even be out until next year. Why do I do this to myself? I should know better than reading the 2nd book of a trilogy before the 3rd is published.  It happens to me every time. 2nd books in trilogies tend to have the "Empire Strikes Back" story-lines. Know what I mean? In the Empire Strikes Back the bad guys make great gains and the good guys seem stymied and possibly near defeat. That is sure the case with Days of Blood and Starlight, lots of bad stuff with just a bit of good sprinkled in here and there.

I am a huge fan of this series and obviously can't wait for the next installment.

Posted by Anne@HeadFullofBooks at 8:39 PM