Charles and Emma: The Darwins' Leap of Faith by Deborah Heiligman 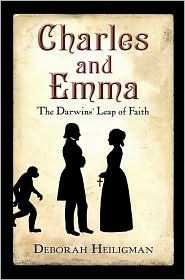 The opening paragraphs of Charles and Emma: the Darwins' Leap of Faith by Deborah Heiligman have Charles Darwin making a very scientific, comparative list with the words MARRY one one column and DON'T MARRY on the other side. As with everything else in his life, Darwin approached the question of marriage from a scientific one. He didn't even have a particular girl in mind when he made the list. So begins the excellent biographical book about the Darwins, their courtship, marriage, family-life and how mariage affected his research and writing on evolution.

Charles and Emma was a highly honored book in 2010 winning The YALSA Excellence in Young Adult Nonfiction, It was also a Printz Honor book, and a National Book Award finalist. So much has been written about Darwin, author of The Origins of a Species which triggered the ongoing debate about evolution, but little has been recorded about his amazing relationship with his wife, Emma, a highly religious person.  That is what this book does in a very readable and interesting format. Emma, Charles's first cousin, becomes in wife, mother of his ten children, his editor, his nurse, and in a lot of ways his sparing partner.


Heiligman uses the Darwin family letters and papers to craft a full-bodied look at the personal influences that shaped Charles’ life as he worked mightily to shape his theories. This intersection between religion and science is where the book shines, but it is also an excellent portrait of what life was like during the Victorian era, a time when illness and death were ever present, and, in a way, a real-time example of the survival of the fittest. -Booklist

At times keeping all the characters straight was a real chore.  In addition to the ten children, there were brothers, sisters, aunts, uncles, and parents to keep track of .  Fortunately there was an excellent family tree in the back of the book which I used several times to remind myself to whom Heiligman was referring. There were also family photos of Darwin and Emma with their children to increase the interest.

I read this book as part of Printz Award Challenge, as a Printz honor book it is one of the books on that distinguished list which I hadn't read yet.  I don't always agree with the books selected by the award committees.  But I do think this book was worthy of its selection.  It is interesting without bogging down in details.  It is written for young adults but I think there is a lot to like for adult readers.  Prior to reading this book I knew little about Darwin except that he was the crafter of the theory of evolution.  I now know much more including more about his theories which are fascinating in themselves. I'm not sure how many young adults will be running to the library to check out this book but I do hope that students with an interest in science or world history will find their way to it. I'll help by pointing them in the right direction.

Posted by Anne@HeadFullofBooks at 2:29 PM

Email ThisBlogThis!Share to TwitterShare to FacebookShare to Pinterest
Labels: Non-fiction